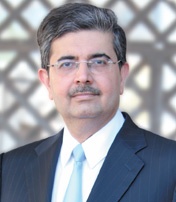 Uday Kotak, founder of Kotak Mahindra Bank, has been named the 'World Entrepreneur of the Year' by global consultancy EY, becoming the second Indian to win the award after Infosys' N R Narayana Murthy.

Murthy, currently the executive chairman of Infosys, had won the title 11 years ago in 2003.

Kotak, executive vice chairman and managing director of Kotak Mahindra Bank, was picked from among 60 finalists from 51 countries by a 10-member global jury.

He was awarded the title late on Monday at an event in Monaco's Salle des Etoiles.

"The world now needs entrepreneurs more than ever to create sustainable, permanent jobs to help secure a global economic recovery. Uday is a truly inspiring World Entrepreneur Of The Year winner for 2014 and together, he and our 59 other country winners are truly helping to build a better working world," said Mark Weinberger, global chairman and CEO of EY.

"I'm delighted and honored to receive this prestigious award at such a spectacular event. It is recognition of the skills and dedication of the 25,000 employees of KMB (Kotak Mahindra Bank) who have worked so hard to build a world class Indian financial services brand," Kotak said.

The judging panel's chief in a statement said Kotak was "recognised for creating a new bank in a challenging and highly regulated environment; with strong focus on inclusive growth".

"We were impressed with his strong focus on inclusive growth, providing low-cost services to rural customers that have a tangible impact on people's lives," said Rebecca MacDonald, chair of the world entrepreneur judging panel. She is the founder and executive chair of Just Energy Group.

The Kotak Mahindra group, which started off with a seed capital of less than $250,000 has now emerged into an international group with $2.8 billion (Rs. 16,520 crore) in revenues.

Uday Kotak rejected a job offer from Hindustan Lever - Unilever's subsidiary in India – to set up Kotak Capital Management Finance Ltd in 1985 and in 2003, the group became the first non-banking finance company (NBFC) in India to convert into a bank.

Over the years, Kotak had forged several partnerships with global financial giants to leverage his group's brand and expertise.