Anand Mahindra first Indian to be honoured with Harvard Medal 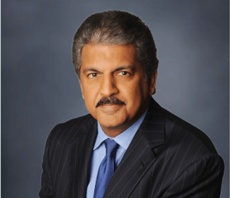 Harvard president Drew Faust, the Lincoln Professor of History, presented Mahindra with the medal at the Annual Meeting of the Harvard Alumni Association during Harvard's 363rd
Program on 29 May.

''To be honoured by one's alma mater is a matter of great personal pride. Harvard has given me much more than just an education; it has expanded my world view and brought in a cross-cultural focus to my personal and professional life. This was also the impetus for establishing the Mahindra Humanities Centre at Harvard in 2010,'' he said.

''Anand Mahindra is a loyal and devoted alumnus of Harvard College and Harvard Business School. He has a deep interest in Harvard and understands the research efforts of the University that can make a positive difference to people around the world. Anand Mahindra is a very deserving recipient of the Harvard Medal.''

Co-founder of the Harvard Business School (HBS) Association of India, Mahindra is also a founding member of the University's South Asia Institute (SAI), the HBS India Research Center, and the SAI field office in Mumbai, India. He is also a longtime member of the Asia Center Advisory Committee.

He is currently a member of the President's Global Advisory Council, the Committee on University Resources (COUR), the HBS Board of Dean's Advisors, and the SAI Founder's Club.

He is also very active with the Harvard College Fund and his class fundraising efforts. In 2010, Mahindra made a transformative gift of $10 million to the Humanities Center. The center was then renamed the Mahindra Humanities Center in honour of his mother, Indira Mahindra.