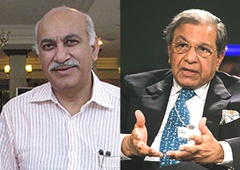 Akbar, who was earlier known to be close to Congress, switched over to the BJP ahead of the Lok Sabha polls and joined the BJP in the presence of party president Rajnath Singh.

73-year-old Singh, a former bureaucrat whose term in the Rajya Sabha is coming to an end shortly, had joined the JD(U) and was elected on the party ticket to the house of elders.

Singh had yesterday written a letter to Bihar chief minister Nitish Kumar conveying his decision to quit and the reasons for it but refused to disclose them.

He, however, has accused Nitish Kumar of shifting the focus from development to his government's survival following the end of alliance with the BJP.

Bihar BJP leader Sushil Kumar Modi had yesterday said that Singh will be inducted into the BJP at 3 pm on Saturday in Delhi.

Akbar said he has come back in politics for its policies and work to bring the nation back into a ''recovery mission''.

''I have come back to politics because of policy (main rajniti me niti ke liye wapas aya hu). The crisis in front of the country is known to all. This is an opportunity to do whatever little we can do for our country,'' he said.

''It is our duty to join hands with the voice of the nation and bring the country back to a recovery mission. I look forward to working in BJP,'' he told media persons.

This is not Akbar's first stint with politics as he had earlier contested the elections from Kishanganj in Bihar on Congress ticket.

Rajnath Singh said people working in different areas such as sports, politics, films and literature have joined the party.

''Now prominent people from the media too are accepting membership of the BJP to give this country a stable government. Akbar is known to be one of the stalwarts in media and has accepted to join the party. I welcome him,'' said Singh.

Akbar, who was close to then prime minister Rajiv Gandhi, acknowledged that the latter was a friend and 20 years have passed since that.

Backing Modi, Akbar said no other leader has gone through so much scrutiny as has Modi.

''It is not only that there is crisis. But now I also see a solution to the crisis. Narendra Modi's leadership is essential for the country,'' he said.

''In 10 years, no other politician has gone through so much scrutiny as Modi has gone through. He was scrutinised by the police, central government, CBI, court-appointed institution,'' he said.

''And those who rake up this issue all the time, I want to tell them to read the Justice Krishna report. How many people are there in Gujarat who are in jail through the legal system. More than 100. Can one tell me the numbers as far as the 1984 and 1993 riots are concerned,'' he said.

He also hoped that Muslims will join hands with the BJP as they are equal citizens of the nation and will come out of the ''politics of fear''.

This would be his second innings in politics.

Akbar, the founder of the English daily The Asian Age was a Congress parliamentarian from 1989 to 1991 during which he represented Kishanganj in Bihar. He lost in 1991.