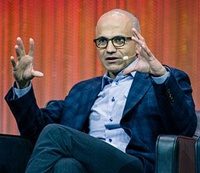 Microsoft today said that Hyderabad-born Satya Nadella would replace Steve Ballmer as its CEO who announced he intended to retire in August.

"As Satya Nadella becomes the third CEO of Microsoft, he brings a relentless drive for innovation and a spirit of collaboration to his new role," Microsoft said.

Nadella, who earlier headed the company's cloud and enterprise business, has been with Microsoft for 22 years. In his earlier responsibility he looked after a division that had $19 billion annual revenue.

The company generating around $78 billion in a year was currently faced with a number of challenges in the market where Apple and Google had emerged more dynamic technology companies.

The son of an IAS officewr, after completing his engineering degree from Manipal University, Nadella left for the US to pursue higher studies, before joiing Microsoft in 1992.

Microsoft further announced that John Thompson, lead independent director, would succeed co founder Bill Gates as chairman, who would assume a new role as "technology advisor," the company said in a statement.

"During this time of transformation, there is no better person to lead Microsoft than Satya Nadella," said Microsoft co-founder Bill Gates, in a statement.

"Satya is a proven leader with hard-core engineering skills, business vision and the ability to bring people together. His vision for how technology will be used and experienced around the world is exactly what Microsoft needs.''