The spiritual leader of the Dawoodi Bohra community Dr Syedna Mohammed Burhanuddin passed away in Mumbai on Friday. 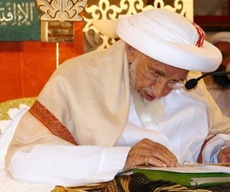 Eighteen of his followers were killed and 40 were injured in a stampede near his residence, when thousands of people gathered to pay last respects to the spiritual leader at the in Malabar Hill area in the early hours on Saturday.

The stampede occurred when huge crowds thronged his house, which is in the vicinity of the official residence of the Maharashtra chief minister, and soon a stampede broke out.

Mumbai Police Commissioner Satyapal Singh said most of the deaths occurred due to suffocation as the lanes were narrow to hold the swelling crowd.

People from all parts of Mumbai and around the city came were pouring in to pay their last respects from around 9 last night. The roads were narrow...It led to suffocation. It was difficult for the people to breathe, he said.

"Some people fell unconscious. Gates were closed following which some people fell on each other. As the doctors are claiming, cause of the death was suffocation," he said.

Syedna, who was to celebrate his 103rd birthday in a few weeks, died on Friday morning at his residence in South Mumbai, a spokesperson for the community said.

The eldest son of Syedna Taher Saifuddin, the 51st Dai ul Mutlaq, Burhanuddin succeeded his father upon his death in 1965.

Syedna Mohammed Burhanuddin was credited with transforming Dawoodi Bohras into a vibrant community.

Dawoodi Bohras are a sect of Shia Muslims, mainly traders, spread all over the world. But one binding factor among all of them is the key principle of ''patriotism as part of the faith.'' It encourages followers to make a positive contribution to the country they live in.

Last year, thousands of Dawoodi Bohras from across the world flocked to the city to celebrate Syedna Mohammed Burhanuddin's 102nd birthday.

A grand procession was organised in honour of the Sydena at Bhendi Bazaar. As part of the celebrations, various activities including planting saplings, recitation and memorisation of the Quran and medical camps were held.

Syedna who transformed the Dawoodi Bohras into a vibrant community, was honoured with highest civilian titles like the Star of Jordan and Order of the Nile by the governments of Jordan and Egypt.

Syedna was conferred honorary doctorates for his efforts in social and educational development by renowned institutes like Al-Azhar University, Cairo, Aligarh Muslim University and University of Karachi.