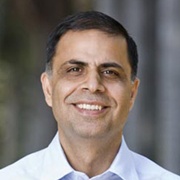 Mylan Inc today announced that Rakesh Bamzai has joined the company and has been appointed president, India Commercial and Emerging Markets.

Bangalore-based biopharm major Biocon, on Thursday announced that its marketing chief Rakesh Bamzai has resigned after 19 years with the organization, which triggered a 2 per cent fall in Biocon's shares.

Bamzai was widely considered to be the next chief executive officer (CEO) of Biocon.

Mylan Labs' current CEO and managing director, B Hari Babu, is responsible for all of its operations, including research and development, active pharmaceutical ingredient (API) and finished dosage production, supply chain management, environmental health and safety, sales and marketing, human relations and finance. He has been with the company since May 2001.

In a notification to the exchanges, Biocon said that Bamzai is leaving the organisation to accept a new leadership role.

''Rakesh has decided to take up a very senior and challenging leadership assignment,'' said Kiran Mazumdar-Shaw, chairperson and managing director of Biocon.

As president of marketing at Biocon, he played a key role in building the company's global biopharmaceutical business. He also spearheaded many strategic partnerships that enabled Biocon to gain wider global access and greater market penetration for its biopharmaceuticals business.

"Many of us at Mylan have had a firsthand opportunity to work with Rakesh over the course of our strategic partnership with Biocon and have observed his strong business and marketing acumen, his strategic insight and outstanding leadership skills. In this new role overseeing all of Mylan's commercial operations in India and emerging markets, we believe that Rakesh will add significant value to Mylan," Mylan president Rajiv Malik commented.

Bamzai said, "I have had the privilege of collaborating with Mylan during my time at Biocon, and I am excited about the significant opportunities I see for the company in India and other emerging markets.

''I look forward to supporting Mylan's continued expansion and differentiation in these exciting growth markets."

Bamzai is a graduate from the University of Mumbai's Department of Chemical Technology.