The Italian Senate on Wednesday expelled three-time Prime Minister Silvio Berlusconi from Parliament over his conviction for tax fraud, in a hard blow which nonetheless may not quite spell finis to his political career. 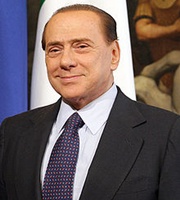 Despite the humiliation, the 77-year-old politician - who has been at the top of Italian politics for 20 years – remained brash and unabashed as usual. ''No political leader has suffered a persecution such as I have lived through,'' he told reporters in Rome.

Berlusconi claimed that the unprecedented move would embarrass Italy internationally. He maintained his defiance as the Senate voted, declaring on Wednesday a "day of mourning for democracy" before thousands of cheering, flag-waving supporters outside his Roman palazzo.

The vote came after a heated debate during which two rival senators nearly came to blows. In effect, it means that Berlusconi cannot take part in any general election for six years.

The ex-PM was convicted of tax fraud in October 2012 over deals his firm Mediaset made to purchase TV rights to American films; and the verdict was upheld in August.

He is also appealing against two convictions of paying for sex with an underage prostitute and a breach of confidentiality over a police wiretap. Berlusconi now faces arrest over these criminal cases as the Senate move means he had lost his immunity from prosecution.

But he has pledged to stay in charge of his popular right-wing Forza Italia party from outside parliament, leading one commentator to say, ''The Berlusconi show is far from over.''

Even though Berlusconi won't hold a seat in Parliament, he is expected to remain influential in Italian politics. He still commands millions of loyal supporters.

While his lawyers chart possible legal challenges and his allies move into Italy's opposition, Berlusconi's fans massed in front of his Roman palazzo for a rally that analysts said was essentially the start of Italy's next electoral campaign.

"Today they are toasting because they can take an adversary, they say a friend, in front of the executioner's squad," Berlusconi said. "It is the day they have been waiting for for 20 years."

He pledged to continue his role as a political leader, citing other figures not in Parliament, such as the founder of the Five Star Movement Beppe Grillo and Matteo Renzi of the Democratic Party, tipped by many as a future premier candidate.

"Also, from outside the Parliament, we can continue to fight for our liberty," he said.

Supporters were treated to a video montage of Berlusconi's greatest political hits from a career that began in 1994 when he first came into power with a political party named after a soccer chant, "Go Italy." He said that even if he's no longer a senator, he will continue to be a force to reckon with.

The Senate vote on whether to remove Berlusconi from the chamber stems from a 2012 law that bans anyone sentenced to more than two years in prison from holding or running for public office for six years. His lawyers claim the law is unconstitutional and have questioned the ''rush'' to expel him while legal challenges are still pending.

The prison term was reduced automatically to one year under a general amnesty; and he is expected to serve his time either under house arrest or through public service.