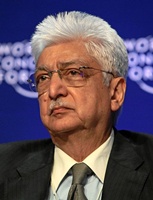 IT tycoon Azim Hashim Premji, the chairman of Wipro Ltd, has emerged as the most generous Indian with a donation of Rs8,000 crore in the past year, according to the Hurun India Philanthropy List 2013.

HCL group chairman Shiv Nadar takes the second spot in the list with a donation of Rs3,000 crore, the report said.

Donations by individuals who hold significant share in contributing companies are accounted on the basis of the percentage share of the company by the individual.

According to Hurun Report chairman and chief researcher Rupert Hoogewerf, the list demonstrated the responsibility taken by entrepreneurs.

The Shiv Nadar Foundation, which completed 20 years in philanthropy this year, is known for its educational initiatives, which directly benefit 15,000 students across India.

G M Rao, with a donation of Rs740 crore, through GMR Varalakshmi, emerged as the third biggest philanthropist in India's corporate world.

Nandan and Rohini Nilekani who came in fourth in the list contributed Rs530 crore.

Contributions from PNC Menon of Sobha Developers and DLF chairman Kushal Pal Singh stood at Rs270 crore and Rs200 crore, respectively for various programmes, including adoption of villages and skills training of the youth.

The average age of the philanthropists in the list was 62 years while that of the top 10 donors was 64 years.

The Companies Bill, 2013 mandates companies, with net worth in excess of Rs500 crore or revenue of over Rs1,000 crore or net profit of over Rs5 crore, to earmark at least 2 per cent of their average net profits of the preceding three years for CSR activities.