Tendulkar will play his last official cricket match in Mumbai on Thursday. The official site for booking tickets crashed on Monday, as the 'hits' were mulitiple times the number tickets available. This is despite the authorities, including the rich but disgustingly run Board of Control for Cricket in India (BCCI), milking Sachin's name to hike ticket prices. 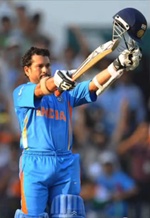 What Sachin will actually score in his last Test match against the West Indies – once the most formidable team in the world but now in some disarray – is anybody's guess. He didn't do anything memorable with the bat in the Kolkata test, scoring a mere 10 runs as India lost by an innings on home ground.

The Australian Sir Donald (Don) Bradman, universally known as the best batsman cricket has ever seen, scored a 'duck' or zero in his last Test innings; but still left the game with an average of close to 100. Tendulkar's career average will come nowhere close to this.

Even Sunil Gavaskar, regarded as India's top bat in his time, would perhaps have a better overall average than Tendulkar, though he was among the first to pour encomiums on Sachin.

It should also be borne in mind that the old-timers – Bradman and Gavaskar – played against vicious fast bowling on uncovered pitches without helmets. Moreover, Test match series were few and far between in those days, unlike today when there is an international cricket match going on almost every day – making it much easier for players to build up their averages.

Gavaskar said today that Sachin Tendulkar would have been successful in any era because of his sound technique and temperament.

Gavaskar said the trio of Bradman, Sir Garfield Sobers and Tendulkar are to cricket what Michael Jordan is to basketball, Mohammad Ali to boxing and Pele to football.

"There are a few men who have embellished their sport and made that sport beyond the sport itself … Bradman, Sobers Sachin Tendulkar ... absolutely took the game to a different level,'' Gavaskar said. He was modest enough not to mention himself.

Former India pace bowler Javagal Srinath commented that while most players on the India team were sobbing after losing in the 1996 World Cup semi-final match, Sachin Tendulkar did not shed a tear.

"After 1996 semi-finals, four or five players were crying. Crying is contagious. I felt I too had to cry to show my commitment to the team. Then I looked at Sachin. He was not crying. He said, 'Why should we cry?' We have played the game and we lost. It is not the end of the world. Why should I cry?" Srinath said at a Salaam Sachin conclave today.

Recalling Sachin's years of captaincy, Srinath said when he was the captain, he expected the team to never lose a match. "We had to win. So high was his talent," he said.

Of course, India did not win many matches during Tendulkar's short-lived captaincy; and he was soon replaced in this position while remaining a valuable member of the team.

Srinath also said Sachin was "tight-fisted" with compliments for his teammates. "It was tough to get a compliment from him. If you wanted to know what he said about you, you had to find out from others. That was one of the good traits of his captaincy. You had got to impress your captain."