Sweden to celebrate centenary of Tagore's Nobel Prize in India 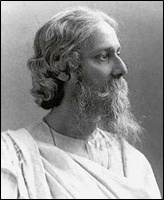 The Swedish embassy has organised a week-long celebration Sweden India Nobel Memorial Week beginning 8 November, coinciding with the centenary of the award of Nobel Prize in Literature to Rabindranath Tagore.

"Tagore was not only the first Indian to bring home the prestigious award but also the non-European to get one in Literature," according to an official statement from the Swedish embassy.

Tagore remains the only poet in the world whose compostions have become the national anthems of two countries - Jana Gana Mana in India and Bangladesh's Amar Shonar Bangla.

The Nobel Prize in Literature 1913 was awarded to  Tagore "because of his profoundly sensitive, fresh and beautiful verse, by which, with consummate skill, he has made his poetic thought, expressed in his own English words, a part of the literature of the West," the Nobel Prize Committee had stated in its award announcement in 1913.

Organised by the Swedish Embassy, the week-long celebrations dedicated to Rabindranath Tagore will mark the centenary of his Nobel Prize in Literature.

The panel discussion will explore the relevance of the timeless poet, writer, and philosopher in today's day and age.

The embassy would display a statue of Tagore along with the English translation of the original text Tagore's Nobel Prize nomination, procured from the Swedish Academy.

The Embassy has also commissioned famous sand ariste Sudarshan Pattnaik to create a sand sculpture of Tagore on the sands of Puri beach, which will be unveiled on 12 November, the eve of the announcement of Tagore winning the Nobel in 1913.

Besides, the Sweden India Nobel Memorial Week 2013 will include seminars, lectures, intercollegiate quizzes and round tables discussions across major cities such as Bangalore, Hyderabad, Pune, Chennai, Kolkata, Ahmedabad and Mumbai.

The centenary year also marked the re-release of by Swedish Tagore expert Olavi Hemmila's work, `Tagore in Sweden - 1921 and 1926', as part of the celebrations.

The Delhi Metro Corporation is also putting up a 'Nobel Memorial Wall' to commemorate Nobel Laureates from India with a week-long display at the Rajiv Chowk Metro station.

Rabindranath Tagore, who died in 1941 at the age of eighty, is a towering figure in literature. His poetry as well as novels, short stories and essays are very widely read, and the songs he composed reverberate around the eastern part of India and throughout India.

Gitanjali, a selection of his poetry for which he was awarded the Nobel Prize in Literature in 1913, was published as an English translation in London in March of that year, and had been reprinted ten times by November, when the award was announced. But he is not much read now in the West, and, the excitement that Tagore's writings created in the early years of the twentieth century has largely vanished.

While Tagore is a deeply relevant and many-sided contemporary thinker in Bangladesh and India, his image in the West is that of a remote spiritualist.