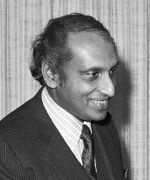 Gamani Corea, veteran economist, diplomat and one of the chief architects of Sri Lanka's first national plan in the late 1950s, passed away on Saturday. He was 87.

He had also helped in the formation of the Group of 77 developing countries, at the first session of UNCTAD, in 1964.

In his condolence message, prime minister Manmohan Singh described Corea as an outstanding international civil servant and diplomat, a brilliant economist and above all, a warm and caring human being.

''Gamani was an outstanding international civil servant and diplomat, a brilliant economist, and above all, a warm and caring human being. I was particularly proud to be able to call him a friend for over three decades, a friendship of which I cherish the warmest memories. It was also a particular privilege that he was a member of the South Commission during the time that I served as its Secretary General,'' the prime minister said.

''Gamani's work and thinking in the arena of economic development were of immense significance, not only for Sri Lanka, but also for developing countries around the world.

His contribution to the world of UNCTAD during his time as its Secretary General was particularly important in ensuring that the voice of developing countries was heard and that their developmental priorities were not lost sight of. He lent his influential voice in support of some of the most important international initiatives aimed at the welfare of developing countries, such as the Integrated Program for Commodities, and the Highly Indebted Poor Country Initiative,'' he added.

Corea focused on achieving better results for poor countries from trade in commodities - the basic farm goods and natural resources that in many cases make up the bulk of LDCs' exports.

He later advocated this idea in his book Taming Commodity Markets: The Integrated Programme and the Common Fund in UNCTAD, which was published in 1992. He also actively promoted South-South cooperation.

"Gamani Corea played a significant role in UNCTAD's formative years, helping to mould it into the organisation we know today," current secretary-general Mukhisa Kituyi said. "We owe him a great deal, and his passing is an occasion of great sadness for us."

Jan Pronk, who served as Deputy Secretary-General of UNCTAD during Corea's tenure, said, "His death is a great loss, not only to his country but also to the international community he had served so brilliantly."

Corea was born on 4 November 1925. He obtained bachelor's and master's degrees from both the University of Oxford and the University of Cambridge between 1945 and 1952, followed by a doctorate in economics from Oxford. He worked as an economist in various capacities in Sri Lanka before becoming his country's ambassador to the European Economic Community, Belgium, and Luxembourg, in 1973.

After leaving the United Nations, Corea continued to pursue his vision of a revamped international economic order, serving with the South Commission from 1987 to 1990, and as a member of the Committee of the South Centre from 1995 to 1998. He went on to serve as President of the committee from 1998 to 2001.

In Sri Lanka, he founded and chaired the Institute of Policy Studies. He also founded the Sri Lanka Economic Association, which he chaired from 1985 to 1991.

Among Corea's several books was the 1980 volume Need for Change: Towards the New International Economic Order.

He had received several honorary doctoral degrees from universities in Europe and Sri Lanka.