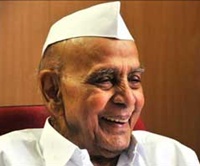 Veteran socialist and a former union minister and deputy chairman of the Planning Commission Mohan Dharia passed away at a hospital in Pune on Monday morning.

He was accorded a state funeral on Monday.

He was 88 and is survived by his wife, two sons and a daughter.

Dharia was born on 14 February 1925 in Maharashtra's Raigad district.

He served as an MP in the Rajya Sabha and Lok Sabha, from 1964-79 and along with late Prime Minister Chandra Shekhar, he was one of the 'Young Turks' in the Congress party of the '70s. He was a minister of state in the Indira Gandhi government, but became a fierce opponent of the Emergency.

Later, as a member of the Janata Party, he served as the union minister of commerce.

Dharia was among the rare breed of politicians who quit politics to champion the cause of environment for nearly three decades.

After retiring from active politics, Dharia led a movement for water conservation through his organisation, Vanrai. He was involved in developing villages, rural economies and the cooperative movement.

A fierce advocate of farmer rights, Dharia was awarded the Padma Vibhushan in 2005.

A lawyer by profession, he was a part of the Praja Socialist Party during the freedom struggle.

President Pranab Mukherjee condoled the death of veteran socialist leader and said the nation has lost an eminent public figure who contributed for greater good of the country.

Mukherjee  said Dharia was a distinguished parliamentarian and an able administrator who served the nation in different spheres.

''His service to the nation as a Union minister and as the deputy chairman of Planning Commission will always be remembered. He also made valuable contribution as a dedicated environmentalist and as a champion of farmers' rights,'' the president said in his condolence message to his wife Shashikala.

''Mohan Dharia's contribution to politics and the environment as an honest worker is unforgettable,'' Maharashtra chief minister Prithviraj Chavan said.

Chavan said that Dharia always presented basic values and thoughts. He contributed to society after retiring from active politics. He made Vanrai Trust a vibrant movement working on the important issue of water.

Nationalist Congress Party chief Sharad Pawar said, ''He was a selfless warrior all throughout his life. He has been an inspiration to people of Maharashtra.''