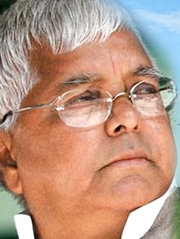 A CBI court in Ranchi today sentenced former railway minister and chief of the Rashtriya Janata Dal (RJD) Lalu Prasad to 5 years' imprisonment and barred him from contesting elections for another six years, for involvement in the fodder scam case.

The court also slapped a Rs25-lakh fine on the fodder scam-accused.

Special CBI judge PK Singh, who had on Monday convicted Lalu and 44 others of fraudulent withdrawal of Rs37.70 crore from the Chaibasa treasury, handed down the punishment over a videoconference link.

The Chaibasa treasury case, however, is only the tip of the Rs950-crore animal husbandry department scam - commonly known as the fodder scam - in erstwhile Bihar prior to the formation of Jharkhand.

The Supreme Court order, which removed immunity for convicted lawmakers, could be used to effectively bar Laloo Prasad from electoral politics for a total of 10-1/2 years, including his earlier jail term of over 140 days.

The SC has ruled that a convicted legislator will remain disqualified for a further six years from the date of release unless a higher court overturns both the conviction and sentencing.

The conviction, which comes 17 years after the case was filed, makes Laloo Prasad the second member of Parliament to be disqualified under a Supreme Court order after Congressman Rasheed Masood, who was convicted on Monday in a criminal case relating to the Tripura medical seats scam.

Out of the 45 people convicted in the fodder scam, Lalu Prasad and 33 others have been sent to Birsa Munda Central Jail on the outskirts of Ranchi while former Bihar chief minister Jagannath Mishra, also convicted in the case, is undergoing treatment at Ranchi's Rajendra Prasad Institute of Medical Sciences

Lalu, who represents Saran constituency in the Lok Sabha, will lose his seat and fresh elections will be needed to replace him in Parliament.

Laloo, however, is hopeful since the SC has ruled that a convicted person can contest an election if both his/her conviction and sentence are stayed by a superior court.

Laloo, 66, also pleaded for leniency and told the judge, ''I was the chief minister of Bihar for two consecutive terms and a union railway minister. Please consider awarding lesser punishment to me.''

Meanwhile, the court had released eight of the convicts in the fodder scam on bail on Monday after sentencing them to three years' imprisonment.

The court has issued arrest warrants against three convicts who failed to appear before it.

The RJD had bet on the government's ordinance designed to protect convicted lawmakers but it seems Rahul Gandhi spoiled the party for Laoo, Rasheed and their ilk after the government decided to withdraw the controversial ordinance and the bill to save convicted legislators.