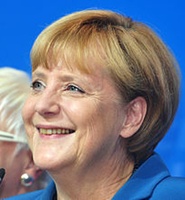 German Chancellor Angela Merkel's conservative party won Germany's election on Sunday, but fell just short of an absolute majority which would have given the country a single-party government for the first time in 50 years.

Merkel urged her party to celebrate "a super result" as she looked set for a historic third term.

Her conservative bloc took about 41.5 per cent of the vote – but the current coalition government with the liberal party is clearly at an end – the liberals failed to make it into parliament at all.

It is thought that Merkel is likely to seek a grand coalition with the Social Democrats (SPD), who won 26 per cent of the vote.

This is an amazing result for Angela Merkel, who is today considered Germany's and Europe's pre-eminent leader. It was clear that she would win this election, but no one really predicted that she could get so close to an absolute majority.

The centre-left Social Democrats improved their share of the vote to come in second, making them an obvious coalition partner.

But according to a BBC report, there are divisions within the SPD about going into coalition again as a junior partner. In 2009 they were punished by the electorate for doing that in 2005.

Now the same thing has happened to the liberal Free Democrats, who have been in coalition with Mrs Merkel for the last four years, but appear to have been kicked out of parliament altogether.

The results showed that the liberal Free Democrats (FDP) won only 4.8 per cent of the vote in an electoral system very different from the rather unrepresentative winner-take-all parliamentary system followed in India.

The FDP is now left with no national representation in parliament for the first time in Germany's post-war history. Party chairman Philipp Roesler called it "the bitterest, saddest hour of the Free Democratic Party".

The FDP was beaten by the Green Party (8.4 per cent) and the formerly communist Left Party (8.6 per cent). It almost finished behind the new Alternative fuer Deutschland (AfD), which advocates withdrawal from the euro currency.

Mrs Merkel earlier addressed jubilant supporters at CDU headquarters. After waiting for chants of "Angie, Angie" to die down, she told them: "This is a super result. We can celebrate tonight because we have done something fantastic."

But in a reference to coalition building, she said it was "too early to say exactly what we'll do".