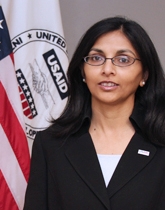 In a development that furthers Indian-American's role in the US government and public administration, President Barack Obama has nominated Nisha Desai Biswal to head the South Asia bureau in the US state department.

An accomplished public administrator, Biswal is currently assistant administrator with USAID, which again is headed by another Indian-American, Rajiv Shah.

Both Biswal and Rajiv Shah, her boss at USAID, have won laurels for their work in Pakistan.

Once the senate approves the presidential nomination, Biswal will be the first person of Indian or South Asian origin to head a state department bureau.

All-American diplomats like Robin Raphel, Karl Inderfurth, Christina Rocca, Richard Boucher, and Robert Blake were at the helm of the South Asia bureau ever since its formation in 1991.

"It gives me great confidence that such dedicated and capable individuals have agreed to join this administration to serve the American people. I look forward to working with them in the months and years to come," a presidential statement said, adding that the date for her confirmation hearing has not been set yet.

Nisha Desai Biswal, who graduated from the University of Virginia, began her professional career in Washington DC with the American Red Cross in the mid-90s before she joined USAID in her first stint.

She worked closely with South Asian diplomats in her capacity as a Hill staffer with the US House of Representatives International Relations Committee from 1999 to 2002. She also did a brief stint with the NGO InterAction before becoming 'majority clerk' for the state department and foreign operations subcommittee on the committee on appropriations in the US from 2005 to 2010 before joining the USAID again.