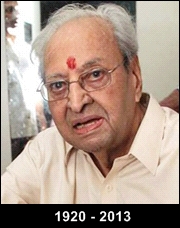 Pran, Bollywood's famous and prolific villain, who breathed his last on Friday, was cremated at the Shivaji Park electric crematorium in Mumbai today.

Pran, 93, who perfected the role of the villain in Hindi films and a winner of Dadasaheb Phalke award, died at Lilavati Hospital last night, after prolonged illness.

Pran Krishan Sikand, popularly known as Pran, had acted in more than 400 Hindi films in a career spanning over six decades.

Marked out by a steely voice, Pran was once the Indian film industry's most hated reel life villain. In real life, however, was the opposite – a real gentleman.

Some of his memorable roles included the domineering, cruel brother-in-law in Ram Aur Shyam, the limping and loveable Malang Chacha in Upkar, the streetsmart fraud in Victoria No 203, and the brother of the character played by Dev Anand who reforms after learning his true identity in Johny Mera Naam, the rough but kind Pathan in Zanjeer, which was a turning point in Amitabh Bachchan's career, the evil lame Uncle Kaido in Heer Ranjha and the stern jailer in Kaalia who sent the worst criminals into shudders, among many others.

Reconition, however, seems to have come late for the veteran. He was awarded the Indian film industry's highest award - the Dadasahab Phalke Award for lifetime achievements - for 2012. 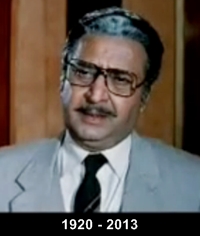 Pran was born into a wealthy family in Delhi on 12 February 1920. His father, Lala Kewal Krishan Sikand, was a government contractor. Pran was educated in Lahore, Kapurthala, Meerut, Dehradun, Rampur, Unnao before he finally shifted to Mumbai.

Pran died at the Lilavati Hospital late on Friday evening following a prolonged illness. Doctors put the cause of death as multiple organ failure.

He is survived by wife Shukla, sons Arvind and Sunil, and daughter Pinky, and grandchildren.