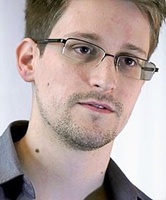 Fugitive whistle-blower Edward Snowden, who blew the lid of the US National Security Agency's vast global eavesdropping network, today withdrew his request for asylum in Russia, where he is reportedly holed up, after the authorities there made it clear that such a request would be denied.

A spokesman for Russian president Vladimir Putin said Snowden withdrew the request after Putin's statement making clear that he would be welcome only if he stopped "his work aimed at bringing harm" to the United States.

''Snowden really asked to remain in Russia," Dmitry Peskov, the spokesman, said. "Learning yesterday of Russia's position … he abandoned his intentions and his request to get the possibility to stay in Russia."

WikiLeaks, the website founded by fellow-fugitive Julius Assange, reported that Snowden has sought asylum in as many as 19 countries, including India.

One doesn't know what he was thinking of, but India is obviously a non-starter – particularly after foreign minister Salman Khurshid went on record today supporting the NSA's phone and internet-tapping network, even though India's citizens and its foreign embassies are among those bugged without their knowledge.

Russia has also refused to hand over Snowden, charged under espionage laws in the US after leaking top-secret documents on the US surveillance programmes. He has been kept hidden away since 23 June, when he landed in Moscow's Sheremetyevo airport from Hong Kong.

His attempts to win asylum have been fraught with difficulty.
Rafael Correa, president of Ecuador, told London's The Guardian newspaper that his country, whose London embassy is sheltering Assange, was not considering Snowden's asylum request.

He said Venezuela had not yet received an asylum request from Snowden. Asked whether he would take Snowden back to Venezuela with him, Maduro answered wryly: "What we're taking with us are multiple agreements that we're signing with Russia, including oil and gas."

But he also said, "Edward Snowden is a 29-year-old young, brave man who didn't kill anyone, didn't give any reason for the start of war."

Among the other countries where Snowden has made asylum requests are China, Bolivia, France and Germany. The latter two are irate with the US after it emerged this week that their foreign embassies have been extensively bugged by American agencies.

At least two other countries where Snowden requested asylum have said they will not cooperate. Radoslaw Sikorski, the Polish foreign minister, said that Snowden's request did "not meet the requirements for a formal application for asylum. Even if it did, I will not give a positive recommendation".

Finland said on Tuesday that it could not accept his application as Finnish law required him to be in the country. Finnish foreign ministry spokeswoman Tytti Pylkko said that Snowden had sent his request by fax to Finland's embassy in Moscow.

In an awkwardly phrased statement released via WikiLeaks late on Monday, Snowden accused the Obama administration of "using citizenship as a weapon" and placing undue pressure on countries where he had applied for asylum.