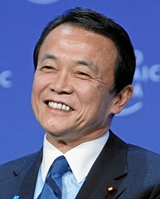 Bankers in Japan, including senior executives, did not speak English well enough to be able to understand the complex financial instruments that were doing the rounds. This, Aso said, helped them ward off trouble that undid major global banks who bought such products.

''Many people fell prey to the dubious products, or so-called subprime loans. Japanese banks were not so much attracted to these products, compared with European banks,'' Aso told a seminar in Tokyo.

''There was an American who said Japanese banks are healthy, but that's not true at all," he said, adding, ''Managers of Japanese banks hardly understood English, that's why they didn't buy.''

The comments from Taro Aso, who has also served as the country's 92nd prime minister from September 2008 to September 2009, are the latest in a line of pronouncements that have raised eyebrows.

Aso had, in January, said the elderly should be allowed to ''hurry up and die'' instead of burdening the government with prolonged and costly end-of-life medical care and in 2007 he had to apologise for his comments on patients with Alzheimer's disease and for making light of flood damage in central Japan.

Aso, meanwhile, said he had managed to keep his foot out of his mouth since Shinzo Abe came to power in December. He, however, initially got the name of the prime minister wrong.

''I have made no gaffes in the past half year even as newspapers said the Aso administration's... No, the Abe administration's biggest problem is Taro Aso's gaffes,'' he said.