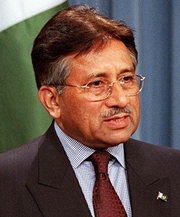 The FIA submitted the case challan to an anti-terrorism court in Rawalpindi headed by Judge Habibur Rehman.

Musharraf must be ruing his decision to attempt a re-entry into Pakistan politics through the democratic route. He has been under house arrest almost since his arrival in April on various cases, and the courts have debarred him from ever contesting an election.

Last week, the new government decided to press ahead with charges over Musharraf's imposition of Emergency rule in 2007, a case in which he could face a 'high treason' rap (See: Musharraf faces trial for high treason: Nawaz Sharif).http://www.domain-b.com/people/in_the_news/20130624_nawaz_sharif.html

And his party got only one seat in the 11 May general election, which saw his arch-foe Nawaz Sharif winning handsomely.

The FIA today presented a four-point charge sheet against Musharraf in the court, accusing him of hatching a conspiracy in connection with the assassination of former prime minister Benazir Bhutto.

Benazir was assassinated in a gun-and-bomb attack outside Rawalpindi's Liaquat Bagh on 27 December 2007.

The charge-sheet submitted today contained the statements of four witnesses, including two American reporters, as well as Benazir's own statement.

The challan stated that the statement of the Americans, established Musharraf as the prime accused in Benazir's murder.

The court subsequently ordered Musharraf to be present in the next hearing scheduled for 2 July.

FIA's special prosecutor Chaudhry Azhar, who wasn't present at the court, was also summoned to appear at the 2 July hearing.

The court will decide about giving Musharraf a permanent exemption from appearing in the court in the next hearing.