Former Pakistan President Pervez Musharraf may become possibly the first dictator to face trial in his own country, as the new Nawaz Sharif government has decided to go ahead with a case against him for imposing Emergency rule in 2007. 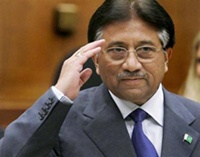 A Pakistan newspaper cited an unnamed federal minister as saying that the Nawaz Sharif government will support all measures to uphold the Constitution and rule of law; and Gen Musharraf may face charges of high treason.

Musharraf may be ruing his decision to attempt a return to Pakistan politics through the democratic route. Not only have the courts debarred him from ever contesting an election in the country, but he has been under house arrest for well over a month on various charges.

Earlier, former attorney general Irfan Qadir had submitted a statement saying that the interim administration, which conducted the 11 May polls, was uninterested in prosecuting Musharraf.

But in its last hearing, the Supreme Court had made it clear that it would implement Article 6 of the Constitution in the case against Musharraf "even if the heavens fall".

Munir A Malik, the new attorney general, met Sharif to discuss the government's stance on the issue when the case against Musharraf is taken up for hearing by the apex court on 24 June.