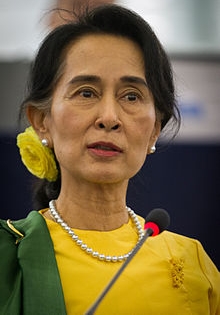 Myanmar opposition leader and Nobel Prize winner Aung San Suu Kyi today declared that she would like to run for president in her country, which has been heading for increased liberalisation over the last couple of years.

Addressing the World Economic Forum on East Asia in the Myanmar capital of Naypyidaw, Suu Kyi appealed for the amendment of the military-drafted constitution, which prevents her from contesting.

"I want to run for president and I'm quite frank about it," the veteran democracy activist told delegates, as she set her sights on elections due to be held in 2015.

"If I pretended that I didn't want to be president I wouldn't be honest," she added.

The current constitution blocks anyone whose spouses or children are overseas citizens from being appointed for the top job. Suu Kyi's two sons with her late husband Michael Aris are British; and the clause is widely believed to be targeted directly at the Nobel laureate.

Changing certain parts of the text requires the support of more than 75 per cent of the members of the fledgling parliament, one quarter of whom are unelected military officials, she noted.

"This constitution is said by experts to be the most difficult constitution in the world to amend. So we must start by amending the requirements for amendments," Suu Kyi said.

President Thein Sein's quasi-civilian government has surprised the world since coming to power two years ago with dramatic political and economic changes that have led to the lifting of most Western sanctions.

Hundreds of political prisoners have been freed, Suu Kyi has been welcomed into a new parliament and tentative ceasefires have been reached in the country's multiple ethnic civil wars.

Suu Kyi, who was herself locked up by the former junta for a total of 15 years, remains hugely popular in Myanmar and her National League for Democracy party is widely expected to win the elections if they are free and fair.

The opposition leader called for all of the Myanmar people to be included in the reform process, warning that otherwise the changes could be jeopardised.

"But, if there are too many people who feel excluded, then the dangers of a reversal of the situation would be very great," Suu Kyi added.

Some 900 delegates from more than 50 countries are gathered in the capital Naypyidaw for the three-day WEF on East Asia - a regional edition of the annual gathering of business and political luminaries in the Swiss resort of Davos.