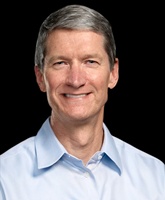 You can now get to meet Apple's chief executive Tim Cook over a hot brew at the company's headquarters in Cupertino, California. But there is a catch or rather a price tag and a pretty steep one at that. You will need to shell out over $180,000 – the current going price for an auction on the website Charitybuzz to get yourself a tete-a-tete with the boss at Apple.

Proceeds from the auction, which would be open until 14 May, would go to the Robert F Kennedy Center for Justice and Human Rights, a charity. With the proceeds Cook would become the latest participant in an ongoing series of "time auctions" to bring benefits for a charitable cause from his celebrity status.

The chat that would last about an hour, might give people time to quiz him about whether the company had lost its magic touch, or the importance of China, or get a little help with their new iPhone or iPad.

With Cook's time seen to be precious, and interaction with him so potentially valuable – bids on the auction rose dramatically. Though the bidders did not have to give real names, they seemed already to include executives from rival companies such as BlackBerry, as also Clearcrate, which is into making cases for the iPad mini tablet. It was briefly the auction leader with a $160,000 bid.

Cook thus resoundingly beat a number of other celebrities, like director Francis Ford Coppola, whose offer of lunch with him and his Napa winemaker had drawn only 1 bid for $4,000.

The chance to act in a scene with Chris Hemsworth (star of the Thor movies) in a Michael Mann film drew 1 bid for $2,500, while the chance to meet actor Alec Baldwin drew two bids with $1,750 winning bid for the moment. Actor Robert DeNiro got two bid with $1,750 leading.