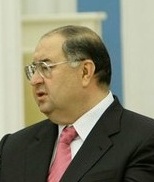 Russian businessman Alisher Usmanov, has displaced Lakshmi Mittal from the number one position in the Times Rich List thanks to a jump in his fortune, which saw it at £13.3 billion pounds ($20.3 billion) after a tough year for the Indian steel magnate.

Warner Music's Len Blavatnik is placed at the second spot in the annual list with £11 billion.

At the third spot are Hinduja brothers Sri and Gopi Hinduja, of the London-based global conglomerate Hinduja Group, with £10.6 billion.

Chelsea Football Club's Russian owner Roman Abramovich, who made his fortune in the oil industry, has moved down two places to fifth with £9.3 billion.

In a list of wealth in the UK whose top spots were dominated by Russian and Indian billionaires, Mittal now stands at fourth after eight years at number one with his fortune taking a £2.7 billion knock to £10 billion.

Uzbek-born Usmanov, Russia's richest man with a major shareholding in British Premier League football club Arsenal, saw his wealth increase £985 million in the past year, according to the annual survey by the British newspaper.

Mittal, who is the chief executive of the world's largest steelmaker ArcelorMittal, has taken a hit due to the decline in value of the company's shares from over €12 euros a year ago to less than €9 on Friday.

With the 1,000 richest people in the UK and Ireland sharing a wealth of £450 billion, the highest British-born person in the list is the Duke of Westminster in eighth place with £7.8 billion from property. He is the only person to have been in the top 10 of the list in each of the 25 years of its compilation.

Other UK citizens to be included in the list are  Sir Philip and Lady Green, who are 16th in the list with £3.8 billion from their retailing empire, and Sir Richard Branson, founder of the Virgin brand, in 19th place, with £3.5 billion.

Former Miss UK Kirsty Bertarelli shares her £7.4 billion pharmaceuticals fortune with husband Ernesto, the same amount as last year, but they are down three places in the list to ninth place.

For inclusion in the Times Rich List, people must have either a British passport or a strong link to the UK such as being based there or spending a significant amount of time there.

According to the BBC, at the time of the publication of the first Rich List in 1989, the Sunday Times was covered with Margaret Thatcher, with the top story announcing the Rich List, declaring that "Britain is still dominated by 'old' money despite nearly 10 years of Thatcherism".

The BBC added, twenty-five years on, the list that was dominated by inherited wealth and aristocracy now was full of cash earned from commodities overseas, such as steel and oil, with three of the top five places being taken by Russian-born businessmen. Though old money has been replaced by new, not much of it had been earned in the UK, it said.

New money had replaced old, but not much of it had been earned in the UK the BBC added.