Sir James Crosby, the former chief executive of British bank HBOS Plc, said in a dramatic announcement on Tuesday that the was giving up his knighthood and 30 per cent of his £580,000-a-year pension after being severely criticised by a report into the downfall of the bank. 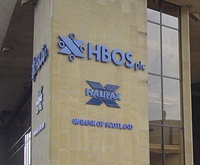 Crosby stepped down as HBOS chief executive in 2006, but he was described in the parliamentary committee report as the architect of a strategy that just two years later led to the bank having to be rescued by Lloyds Banking Group and eventually bailed out with £20 billion of taxpayers' money.

Breaking his silence after Friday's damning account from the Parliamentary Commission on Banking Standards, Sir James said he was ''deeply sorry for what happened at HBOS and the ensuing consequences for former colleagues, shareholders, taxpayers and society in general''.

He has also quit as the senior non-executive director of Compass with immediate effect, ending days of speculation over his position at the FTSE100 catering company.

He acknowledged that the report, which painted him as the ''architect of the strategy that set the course for disaster'' had ''made for very chastening reading''.

The commission, chaired by Tory MP Andrew Tyrie, found a ''colossal failure of senior management'' and called for Sir James and two other former HBOS directors – his successor Andy Hornby and chairman Lord Stevenson – to be banned for life from the financial services industry.

Attention is now likely to turn to Hornby, the current chief executive of HBOS – now a subsidiary of Lloyds - and crossbench peer Lord Stevenson.

Sir James said, ''Shortly after I left HBOS (in 2006), I received the enormous honour of a knighthood in recognition of my own – and many other people's – contribution to the creation of a company which was then widely regarded as a great success.

''In view of what has happened subsequently to HBOS, I believe that it is right that I should now ask the appropriate authorities to take the necessary steps for its removal.''

In volunteering to give up his honour, Sir James was seeking to avoid a re-run of the hounding of former Royal Bank of Scotland boss Fred Goodwin, who was stripped of his knighthood after a public outcry.

Sir James was lambasted by the commission for putting in place a ''culture of perilously high–risk lending'', where shoddy risk controls produced an ''accident waiting to happen''.

Sir James said he would also give up 30 per cent of his ''substantial pension entitlement'', though the cut will still leave him with an index-linked £406,000 this year that will rise with inflation.

Of his pension cut, Sir James said, ''I will be discussing how this reduction is implemented, and whether the amount waived should go to support good causes, or benefit shareholders, with the pension scheme's employer and trustees.''

He added that ''with great personal sadness'', he had also decided to stand down as a trustee of charity Cancer Research UK.

On Friday, within hours of the report's publication, Sir James resigned from his role as an advisor to private equity firm Bridgepoint Capital.

Paul Moore, the HBOS whistleblower fired by Crosby in 2004 for warning that the bank's growth was "a serious risk to financial stability and consumer protection", welcomed his former boss's decision but said Crosby should "specify what he did wrong" and "be an example to everyone".

As chief executive of the Halifax bank, Sir James oversaw the 2001 merger with Bank of Scotland to create HBOS, and ran the group until 2006.