More reports on: IT news, Google

Google chairman Eric Schmidt has warned that lack of infrastructure and adequate technology mean that India was in very real danger of missing the internet revolution completely. 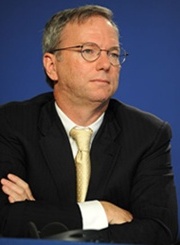 "It is well behind in the web services model that the rest of the world is adopting," Schmidt told CNBC-TV18 late Wednesday during a trip to India.

Schmidt said, ''I'm worried that India, having been satisfied with the great success of their IT revolution, have made the same mistake many companies do - they rested on their laurels without understanding how quickly technology changes.''

Schmidt was referring to the poor fibre optic connectivity in India, which has been widely acknowledged to be the future of high speed internet.

''India's connectivity to the net has always been weak. There are insufficient undersea cables to handle the bandwidth, fibre optic cables are proprietary instead of public, and infrastructure didn't get enough attention,'' said Schmidt while attempting to answer why the internet revolution is bypassing the country.

When asked to explain why only 150 million out of 1.2 billion Indians had access to the internet, he said that the government had perhaps grown complacent due to the country's success in producing large software and IT companies.

"It is crucial for India to invest and enable fast fibre internet connectivity within the country, between the country and the other countries," he added.

He added however that all was not bleak, because his meetings with a number of people had indicated that there was a huge commitment to righting many of those wrongs and establishing fibre optic networks and mobile networks in India within the next year.

Schmidt also said that the next big revolution was smartphones, adding that a vast majority of people would encounter the internet on low-cost, powerful smartphones in the future.

Schmidt, who stepped down as the Google chief executive officer to take over as chairman almost two years ago, said the next two years could change the landscape with the advent of $50 (around Rs2,500) smartphones.

Schmidt said Google was actively cooperating with vendors to help bring down prices.

Schmidt is in New Delhi for the first Google Big Tent event to be held in India, a forum that brings together policymakers and internet experts.