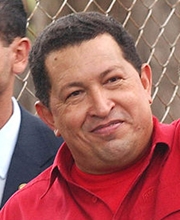 President Hugo Chavez (Hugo Rafael Chávez Frías), who led Venezuela for the past 14 years, passed away on Tuesday, losing a long fight to cancer and leaving thousands of his supporters mourning on the streets of Caracas.

The Venezuelan government announced seven days of mourning for the departed leader.

His body will be taken to the Military Academy in Caracas where it will lie in state until a state funeral on Friday. All schools and universities will also remain shut for the week.

Chavez, 58, had been seriously ill with cancer for more than a year and was battling the disease for the past two years.

A self-proclaimed revolutionary, Hugo Chavez inspired a left-wing revival across Latin America even as he continued to remain controversial with his anti-Americanism.