Bullish on US recovery this year: Mukesh Ambani

"We will see the beginning of a recovery, particularly in the US", Mukesh Ambani, chairman, Reliance Industries tells journalist and author Fareed Zakaria, who hosts CNN's weekly public affairs talk show "Fareed Zakaria GPS", in an interview. domain-b brings you a transcript of the interview

Fareed Zakaria, host "Fareed Zakaria GPS": Mukesh Ambani hasn't given a television interview in almost a decade. He has never let TV cameras into his 27-story home in Mumbai. Until now. Ambani is the richest man in India, the second richest man in all of Asia. He is the chairman of India's largest company, Reliance Industries, which his father started in 1980, making textiles. Today, their revenues come mostly from energy, though they are making big bets in retailing and telecommunications as well. 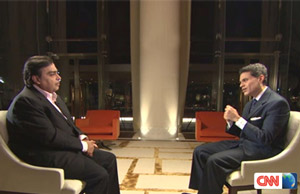 Zakaria: Tell me, you have a vantage point to look at the global economy. You  run India's largest company. Where do you think we are, um, five years after the financial crisis began?

Mukesh Ambani: Well, I'm more optimistic than most. And, my view is that this year, we will see the beginning of a recovery, particularly in the US

Zakaria: And you - and you - you think that that's because just the inherent strengths of the US economy?

Ambani: There has been a fundamental transformation in the energy scene in the US. For many decades, we have heard that the US will be independent of foreign imports of energy. Realistically, I can now tell you that it is my judgment that this will happen in the next five or seven years, The US has truly found non-conventional energy in shale oil and gas which is really, really bringing benefit not only to the population in the US, but, really, to across the world.

Zakaria: You've invested in solar? Do you think, in the next 10 or 15 years, the costs will come down dramatically?

Ambani: Absolutely. I think so. And I think that, ultimately, the way I think about energy is that we will transit from what I call a hydrocarbon present, which is coal, oil and natural gas, over the next many decades, into a fully renewable, sustainable future. And solar really will be at the heart of it.

Zakaria: Let me ask you about the hydrocarbon present. You run the largest refinery in the world in Jamnagar. What will happen, if there were a military strike on Iran? What would happen to the price of oil, in your estimation?

Ambani: Well, I think that the world is a lot more sane. My own view is that if we see small blips, I think that we have a resilient enough system. And today, there is enough spare capacity, right, in the system to take care of eventualities.

Zakaria: You were very bullish about the United States, probably more bullish than a lot of Americans. What about the other key drivers of the world economy? Because a lot of people say, look, China is slowing down, Brazil has slowed down, India has slowed down? What do you think of the emerging markets story?

Ambani: I think that China is maintaining steady growth. It's not decelerating. Europe has found its own transition path. And they will transgress (sic) through the financial system in an orderly way, India has had some slow growth, but I am really very optimistic on India. I think that...

Zakaria: Why is that? Explain that, because in - when people look at India today, they see growth is at 5.5 per cent now. You talk to foreign investors and they say the infrastructure is terrible, the government, you know, doesn't do enough reform, it's very difficult to operate in India. You look at all that and you're not - you're not - you're still bullish?

The beauty of India is that all our billion people count. And they have aspirations. And it is really a bottom-up story. It's not a top-down story. So, yes, we will, adjust with what happens in the rest of the world, but we are on a long-term growth trajectory. And this is just not growth in terms of GDP numbers, right. This really is for well being of each and every Indian. And that's the aspiration.

Zakaria: Do you think that one of the problems India has to deal with is inequality? It is still one of the poorest countries in the world, and yet it has the second- largest number of billionaires in Asia. People worry about the growing inequality.

Ambani: If you think about inequality, that's not only a problem in our country. It's really the problem all across the world. Income comes from opportunity. You take our own example, as Reliance. When I joined Reliance in 1980,  the market value of Reliance was $30 million or $40 million. And in 30 years the opportunities that were provided, by this country has enabled us to create wealth for India.

My father was a big believer that any business that has the sole purpose of making money is not worth doing. Business must serve a larger societal purpose. Reliance raised all its money from capital markets and from individual small shareholders. So we've created a million millionaires just by investing in Reliance out of ordinary Indians. And that is the process of creating wealth for the country. Once you create opportunity, wealth comes.

Zakaria: But do you agree, you -- you've heard all this criticism, that you, in particular, have responsibility. You are the richest Indian. You run the largest company in India. You live in this fabulous house that was, you know, talked about much. Do you see yourself as having a special responsibility?

Ambani: Yes, of course. The way I think about these things is I really have my father as my role model. And he started off  with nothing. And one of the things that he said to me is that you really don't know, Mukesh, what it is to be poor. And make sure that you maintain everybody's self-respect. So when you give, people hold their hand on this basis, don't give on that basis.

When you give, and if people hold their hand like this  (holding his hand in a gesture of blessing), that means they bless you. That's the way to give. And in a certain sense, some amount of anonymous giving or doing things that change societies, doing things that leave a lasting impact, and even if it be creation of businesses, creation of jobs, right, creation of sustainable institutions that last beyond you, is the best way that you can contribute to India.

Zakaria: Mukesh Ambani, a pleasure to have you on.

Ambani: Thank you, Fareed. It was a pleasure.