Eric Schmidt to cash in $2.5 bn by selling nearly half of his Google stock 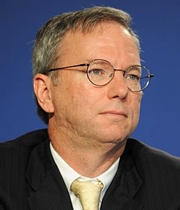 Eric Schmidt, chairman of internet search giant Google is planning to sell around 42 per cent of his holdings in the company worth about $2.5 billion.

In a filing yesterday with the US Securities and Exchange Commission, Google said that Schmidt plans to sell upto 3.2 million of his shares to diversify his portfolio and raise personal liquidity.

This sale is part of a pre-arranged stock selling plan the California-based company approved in November 2012.

"The pre-arranged trading plan was adopted in order to allow Eric to sell a portion of his Google stock as part of his long-term strategy for individual asset diversification and liquidity," Google said  in the filing.