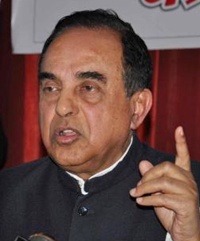 Janata Party president Suramanian Swamy has filed a petition with the Election Commission of India seeking derecognition of Congress, after the ruling party confessed to have lent money, allegedly for the revival of the defunct National Herald newspaper.

Congress has "prima facie" committed an offence under electoral law as well as the Income Tax Act for which it is necessary to hold hearings and decide on derecognising the party, Swamy said in his letter to the Election Commission.

"Senior Congress leader and spokesperson Janardhan Dwivedi in his press release dated November 2 admitted that Congress has loaned (about Rs90 crore as reported) to a company incorporated under Section 3 of Companies Act, 1956 by name Associated Journals Pvt Ltd. This loan is in violation of the guidelines and rules that has to be mandatorily followed by political parties for registration as well as recognition,'' the letter said

''Section 29A to C of RPA and section 13A of the I-T Act do not make any provision for any political party to extend loans to companies with or without interest," it added.

Congress said it extended "interest-free loans to revive the defunct National Herald newspaper, from which no commercial profit has accrued to the Indian National Congress".