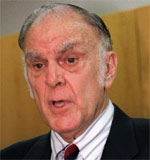 F Sherwood Rowland, the Nobel prize-winning chemist who sounded the alarm on the thinning of the earth's ozone layer, has passed away at the age 84.

The scientist died on Saturday, at his home due to complications from Parkinson's disease, according to the dean of the University of California, Irvine's physical sciences department on Sunday.

''We have lost our finest friend and mentor,'' Kenneth C Janda said in a statement. ''He saved the world from a major catastrophe - never wavering in his commitment to science, truth and humanity and did so with integrity and grace.''

Rowland was among three scientists who won the 1995 Nobel Prize for chemistry their work on the formation of the ozone layer and its decomposition through chemical processes in the atmosphere.

The prize came more than two decades after calculations by Rowland and post-doctoral student Mario Molina showed that if the human use of chlorofluorocarbons, a by-product of aerosol sprays, deodorants and other household products, continued unchecked at the at the pace at the time, the ozone layer would be depleted after several decades. Their work added to the findings by atmospheric scientist Paul Crutzen.

Their prediction attracted immense interest and was strongly challenged partly because the non-toxic properties of CFCs were thought to be environmentally safe. Their work was widely recongised over a decade later with the discovery of the ozone hole over the earth's polar regions.

''It was to turn out that they had even underestimated the risk,'' a Nobel committee said in its award citation for Rowland, Molina and Crutzen.