Three scientists share the 2011 Nobel Prize in medicine, including Dr Bruce A. Beutler, Dr Jules A Hoffmann and a deceased Dr Ralph M Steinman for their work on immune system.

Dr Steinman, who used his own discoveries to fight cancer to stretch life,  however, died on 30 September, three days before the news could reach him.

Canadian-born Ralph Steinman, 68, had been treating himself with a groundbreaking therapy based on his own research into the body's immune system but died on Friday after a four-year battle with pancreatic cancer, his colleagues at Rockefeller University in New York called it a "bittersweet" honour.

The Nobel Committee at Sweden's Karolinska Institute said it was aware of Steinman's death; but said it had not known before making its announcement.

"This year's Nobel Laureates have revolutionised our understanding of the immune system by discovering key principles for its activation," the Nobel Committee said in a release.

Ralph Steinman discovered the dendritic cells of the immune system and their unique capacity to activate and regulate adaptive immunity, the later stage of the immune response during which microorganisms are cleared from the body.

The discoveries of the three Nobel Laureates have revealed how the innate and adaptive phases of the immune response are activated and thereby provided novel insights into disease mechanisms.

Their work has opened up new avenues for the development of prevention and therapy against infections, cancer, and inflammatory diseases.

Bruce A Beutler was born in 1957 in Chicago, USA. He received his MD from the University of Chicago in 1981 and worked as a scientist at Rockefeller University in New York and the University of Texas in Dallas, where he discovered the LPS receptor. Since 2000 he has been professor of genetics and immunology at The Scripps Research Institute, La Jolla, USA.

Jules A. Hoffmann was born in Echternach, Luxembourg in 1941. He studied at the University of Strasbourg in France, where he obtained his PhD in 1969. After postdoctoral training at the University of Marburg, Germany, he returned to Strasbourg, where he headed a research laboratory from 1974 to 2009. He has also served as director of the Institute for Molecular Cell Biology in Strasbourg and during 2007-2008 as President of the French National Academy of Sciences. 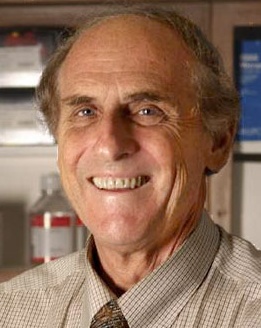 Ralph M Steinman was born in 1943 in Montreal, Canada, where he studied biology and chemistry at McGill University. After studying medicine at Harvard Medical School in Boston, MA, USA, he received his MD in 1968. He has been affiliated with Rockefeller University in New York since 1970, has been professor of immunology at this institution since 1988, and is also director of its Center for Immunology and Immune Diseases.