Indira Gandhi, the world's longest serving woman prime minister, is among 25 most powerful women of the past century listed in the latest edition of Time magazine. The list also includes Mother Teresa and Philippines' Corazon Aquino. 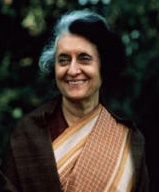 Indira Gandhi comes ninth in the list that is topped by Jane Addams, an advocate for women's suffrage and the first American woman to win a Nobel Peace Prize. UD secretary of state Hillary Clinton comes sixth in the list.

"She was the nation's daughter, brought up under the close watch of both her father Jawaharlal Nehru, who was India's first Prime Minister after decades of British rule, and her country," Time wrote about Indira Gandhi.

When Indira Gandhi was elected prime minister in 1966, Time wrote on its cover: `Troubled India in a Woman's Hands.'

"Those steady hands went on to steer India, not without controversy, for much of the next two decades through recession, famine, the detonation of the nation's first atomic bomb, a corruption scandal and a civil war in neighboring Pakistan that, under her guidance, led to the creation of a new state, Bangladesh," Time wrote in its latest issue.

And, "By the time she was assassinated, in 1984, Gandhi was the world's longest-serving female prime minister, a distinction she holds to this day," it said.

On Mother Teresa, the magazine wrote: "Born Agnes Bojaxhiu to Albanian parents living under the Ottoman Empire, the petite nun made her way to India in 1929, building her start-up missionary community of 13 members in Kolkata into a global network of more than 4,000 sisters running orphanages and AIDS hospices".

"Sometimes criticised for lacking adequate medical training, not addressing poverty on a grander scale, actively opposing birth control and abortion and even cozying up to dictators, the winner of the Nobel Peace Prize nonetheless inspired countless volunteers to serve, and will wear her white habit all the way to Catholic sainthood,"