Robert McNamara: The Quiz Kid who went to war

Washington: Robert S McNamara, the former president of the World Bank, who, as a previous US secretary of defence, earned himself a reputation as the architect of the infamous Vietnam War died Monday morning at the age of 93.

McNamara died at 5:30 am at his home, his wife Diana informed a news agency, saying he had been in failing health for some time. No cause of death was given. 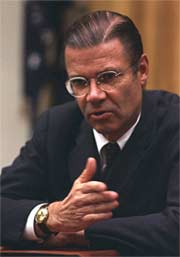 Inspite of the variedness of his career, McNamara remained fundamentally associated with the Vietnam War, which even got dubbed as "McNamara's war." For the United States of America this was the only war in its history where it withdrew without achieving victory.

McNamara remains the longest serving secretary of defence, holding the assignment under two presidencies – that of John F Kennedy and Lyndon B Johnson. In that capacity he orchestrated a military build-up in Vietnam that escalated into one of the most divisive and bitter wars in US history. When the last US helicopters finally exited Saigon, with desperate refugees clinging onto footboards, 58,000 Americans had laid down their lives for a profound miscalculation on the part of a bunch of bureaucrats that were memorably described by award-winning journalist David Halberstam as that generation's 'best and the brightest' in a book of the same name (The Best and The Brightest)

The Vietnam War was a seminal event for a generation of people around the globe, and  in particular American society itself, which was torn apart by the event. His son, a Stanford University student, protested against the war even as his father was running it.

As secretary of defense McNamara was a key figure in such major crises of his times as the Bay of Pigs fiasco and the Cuban missile confrontation with the Soviet Union, but it was his confrontation with a little known poor peasant country half way around the world from America that forever defined him.