Arnold, who has been the highest-ranking woman executive at the company and chief operating officer Robert A McDonald were promoted in 2007 in what some analysts perceived then as setting up a succession for chairman and CEO AG Lafley. 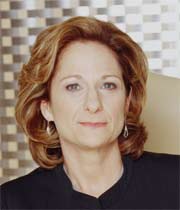 Monday's announcement leaves McDonald as the current front-runner to next lead the company whose products include Tide detergent, Pampers diapers and Gillette shavers. But Lafley, P&G's CEO since 2000 and now 61, has rebutted recent speculation that he is ready to retire, telling analysts in December: "The rumours of my passing are greatly exaggerated."

"Susan has been an integral part of P&G's leadership team over the past decade, most recently as president of global business units responsible for more than $80 billion in sales and more than 300 brands worldwide,'' said Lafley. ''She has also been an architect of the company's winning beauty strategy for the past 20 years. She's led the transformation of P&G into one of the world's leading Beauty companies - with vision, creativity, consumer understanding, and game-changing innovation.''

Underscoring the impact Arnold has had on the company, Lafley said that when she became president of the company's personal beauty care business 10 years ago, P&G had only one billion-dollar beauty brand, Pantene. Today, there are eight billion-dollar brands in the Company's Beauty & Grooming portfolio - Pantene, Olay, Head & Shoulders, Wella, Mach3, Gillette, Fusion and Braun - and eight more with sales between $500 million and $1 billion a year.

P&G said Arnold would retire on 1 September after 29 years with the company. The announcement said it has long been her intention to step down when she turned 55 - which occurred on Sunday. She will report on special assignment to Lafley until retirement. Her job won't immediately be filled, and the company said vice chairmen who had reported to her will now report directly to Lafley, "reducing a layer of management as part of the company's ongoing simplification effort."

Most recently, Arnold has played a pivotal role in P&G's focus on sustainability. Under her leadership, P&G adopted company-wide sustainability goals. Sustainability has been integrated into strategies and plans in every business unit. She has championed social sustainability and has sponsored P&G's Children's Safe Drinking Water program, which has delivered more than a billion litres of safe drinking water to people in need around the world.

Arnold will continue to serve on the Boards of Directors at The Walt Disney Company, McDonald's, Catalyst, and Save the Children. Arnold is frequently ranked among the most powerful women in US business for her high-profile roles at the company. She was named vice chair for P&G Beauty in 2004, then vice chair for Beauty and Health in 2006.