Isro looks to power India with helium-3 mined on moon

The Indian Space Research Organisation (Isro) will look for precious helium-3, which could meet all its energy needs and would be enough to power the world for the next 250 years. 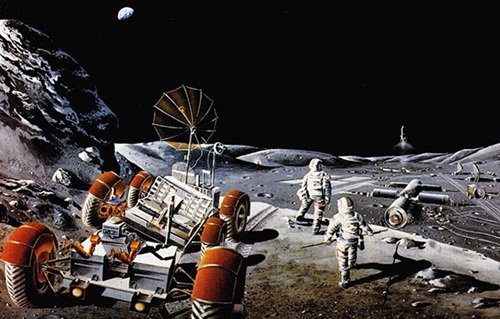 Come October, Isro will be launching a rover to explore virgin territory on the lunar surface and analyse crust samples for signs of water and helium-3, which is rare on Earth, but abundant on the moon.
K Sivan, chairman of Isro, believes that the moon has enough helium trapped within that can be effectively mined to meet our energy requirements.
Sivan said all of India's energy requirements could be met through helium-3 mined from the moon.
Isro believes that the remote south side of the moon potentially holds enough helium-3 isotopes and it will use the rover to get there and collect samples for analysing. Once the rover gets there, it will study the potential for mining a source of waste-free nuclear energy that could be worth trillions of dollars.
"The countries which have the capacity to bring that source from the moon to Earth will dictate the process,'' the Isro chairman said, adding, "I don't want to be just a part of them, I want to lead them.''
The mission would consolidate India's place among space exploring nations racing to the moon, Mars and beyond for scientific, commercial or military gains. The governments of the US, China, India, Japan and Russia are competing among themselves.
Startups and billionaires entrepreneurs like Elon Musk, Jeff Bezos and Richard Branson are also competing to launch satellites, robotic landers, astronauts and tourists into the space.
Isro plans to land a rover on the moon ahead of its next steps that include putting a space station in orbit and, potentially, an Indian crew on the moon. Isro, however, has not set a time frame for the programmes.
"We are ready and waiting,'' said Sivan, adding, "We've equipped ourselves to take on this particular programme.''
MORE REPORTS