The National Aeronautics and Space Administration (NASA) has spotted a massive, hazardous space rock that is hurtling towards the Earth at a very high speed and might approach the Earth possibly by 15 February. 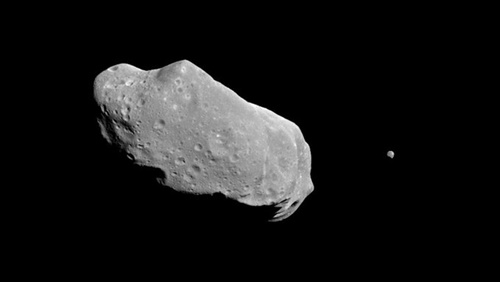 According to the Express UK, NASA’s asteroid tracker spotted a Near-Earth Object (NEO), named 2002 PZ39, moving towards the Earth at a speed of 57,240 km per hour.
The asteroid, with diameter of 3,280 feet, is bigger than the largest man-made structure in the world, which, according to scientists, is a Potentially Hazardous Object (PHO).
If the PZ39, which is classified as a PHO, happens to pierce through our atmosphere and collide with the Earth’s surface, it has the potential for destruction on a continental or global scale, according to the report.
While the PZ39 looks very small when compared to the 1-=km diameter asteroid that might have led to the extinction of the dinosaurs 66 million years ago from the face of Earth, the impact of the strike of PZ39 could be very disastrous.
If this asteroid does hit the Earth, the impact would be equivalent to blowing up more than 60 megatons of TNT, and may trigger a nuclear winter that can threaten the very existence of living beings.
PZ39 is an Apollo asteroid, which means it intersects the path of our planet quite often while moving around the Sun. Since it traces an Earth-crossing orbit, the chances of a collision remain high every time it moves this way, says the report.
Based on a study of the meteorites that have fallen on Earth, scientists have arrived at a theory on how the amalgamation of different materials formed the mantle of Mars. They say similar meteoric objects might have hit the surface of the Red Planet millenniums ago.
A recent study has revealed that Mars took millions of more years to form than space scientists earlier thought. According to space scientists, Mars was formed due to early cosmic impacts, indicating that the process took place much, much later.
The research conducted by the Southwest Research Institute (SwRI) in San Antonio reveals that the solar system used to be a violent and chaotic zone in the past. Tiny protoplanets that were barely 1,900 km in diameter later collided with asteroids and other space debris to give birth to the celestial bodies as we see them today.
Similarly, planetesimals might have also collided with Mars in its rudimentary form, aeons ago. These collisions, the scientists believe, must have released “iron-loving” components to the planet’s soil. The materials such as platinum, gold, and tungsten then helped the planet crystallise really fast.
White House has, meanwhile, has called for the biggest NASA budget in decades to reach the moon, Mars and the Sun.
MORE REPORTS