Adapted from a Italian-made Tecnam P2006T twin-engine propeller plane, the X-57 has been under development since 2015 and remains at least a year away from its first test flight. 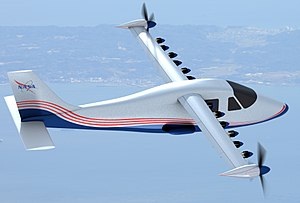 US space agency Nasa on Friday unveiled an experimental version of its all-electric aircraft, the X-57 “Maxwell,” at its lesser-known aeronautics lab in the California desert. The X-57, which has been under development since 2015, is expected to make its first test flight over Edward Air Force Base in the near future.
Adapted from a Italian-made Tecnam P2006T twin-engine propeller plane, the X-57 is still underdeveloped as only two of the 14 large electric motors that will ultimately propel the plane arefitted into the plane so far. Once the electric motors, to be powered by specially designed lithium ion batteries, are fitted into the plane, NASA deemed the Maxwell ready for its first public preview.
Nasa also showed off a newly built simulator that allows engineers, and pilots, to get the feel of what it will be like to maneuver the finished version of the X-57 in flight, even as the plane remains under development.
Nasa also announced the successful mating o all four RS-25 engines into the structure to the core stage for Nasa Space Launch System (SLS) rocket for Artemis I, the first moon-to-mars mission of SLS and Nasa Orion spacecraft. To complete assembly of the rocket stage, Nasa said its engineers and technicians are now integrating the propulsion and electrical systems within the structure. The completed core stage with all four RS-25 engines attached is the largest rocket stage Nasa has built since the Saturn V stages for the Apollo Programme that first sent Americans to the Moon.
The stage, which includes two huge propellant tanks, provides more than 2 million pounds of thrust to send Artemis I to the Moon. Engineers and technicians at Nasa’s Michoud Assembly Facility in New Orleans attached the fourth RS-25 engine to the rocket stage Nov. 6 just one day after structurally mating the third engine. The first two RS-25 engines were structurally mated to the stage in October.
After the assembly is complete, crews will conduct an integrated functional test of flight computers, avionics and electrical systems that run throughout the 212-foot-tall core stage in preparation for its completion later this year. This testing is the first time all the flight avionics systems will be tested together to ensure the systems communicate with each other and will perform properly to control the rocket’s flight. Integration of the RS-25 engines to the massive core stage is a collaborative, multistep process for Nasa and its partners Boeing, the core stage lead contractor, and Aerojet Rocketdyne, the RS-25 engines lead contractor. 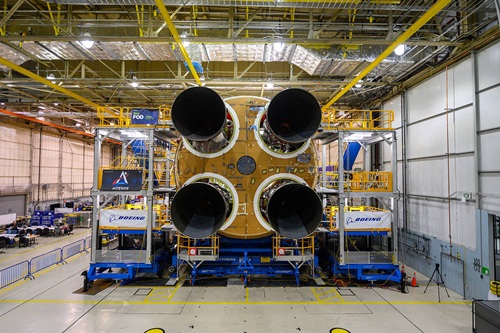