Cyprus has rejected a European Union proposal to raise as much as $7.5 billon (€5.8 billion) through a one-time levy on bank accounts, as part of a $13-billion (€10 billion) euro zone bailout plan, pushing the tiny European nation closer to bankruptcy. 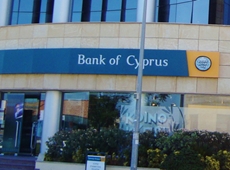 But the move helped European shares recover on Wednesday, after three days of losses, as investors hoped that European policymakers would find alternative ways to avoid a blow out of the Cyprus crisis.

Brent crude climbed to $108 a barrel, rising from a three-month low hit in the previous session.

A revised draft bill discussed in Parliament's finance committee had proposed to spare all deposits below €20,000 ($25,900) from any levy.

A vote in favour of confiscation of bank accounts was needed to make Cyprus eligible for the €10 billion bailout loan from its euro partners and the International Monetary Fund.

The levy on bank accounts was meant to raise €5.8 billion, which is part of Cyprus securing a desperately needed international bailout.

The proposal had enraged the Cypriots and foreign account-holders based abroad, forcing a run on the banks.

Russian President Vladimir V Putin was furious over the European Union's proposal to seize bank deposits to bail out the banking system in Cyprus, saying it was specifically designed to extract money from Russian depositors who are estimated to hold at least a quarter of the deposits in the Mediterranean island's banks.

According to the Regional Banking Association of Russia, Russians hold €15.4 billion (about $19.9 billion) of the total foreign deposits of €26.8 billion in Cyprus in the overall total of €64.8 billion.

Russian prime minister Dmitry Medvedev compared the measure to "a confiscation of someone else's money".

Parliament, too, rejected the bill with 36 deputies in the 56-member House voting against it and 19 abstaining. None supported the bill.

The European Central Bank (ECB) also, on Tuesday, made a climb-down from its original threat of closing the emergency for Cypriot banks, saying it was committed to providing liquidity within certain limits.

Cyprus now faces potential bankruptcy and a possible ejection from euro zone, which could again bring financial markets back to the Greek bond days and jeopardize the future of the European single currency.

Cyprus and the euro zone will now have to find alternative solution to the crisis to avert the prospect of the country drifting away from the euro zone.