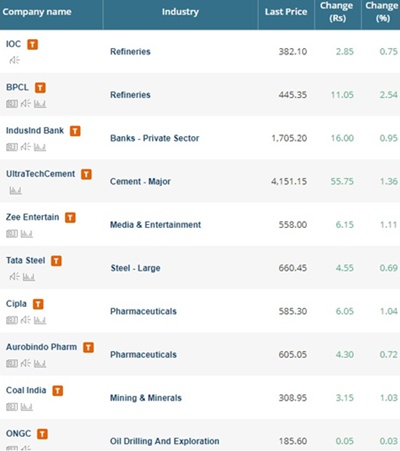 3:15 pm Sectoral Performance: All sectoral indices traded in the red in late trade. PSU Bank index fell the most, down 2.5 percent after investigation deepened in the PNB fraud case.

3:12 pm Order Win: Ashoka Buildcon said its subsidiary Ashoka Concessions Limited has received a letter of award (LOA) from National Highways Authority of India for the project -- six laning of Khairatunda to Barwa Adda section of NH-2 -- in Jharkhand under NHDP Phase-V on Hybrid Annuity Mode.

The company has signed a significant IT deal with the Norway based global energy company Statkraft, which is Europe's leading generator of renewable energy and Norway's largest.

With this partnership the company will enable Statkraft to adopt market standard IT services globally in 18 countries, based on the principles of flexibility, automation and innovation.

More than two shares declined for every share rising on the BSE. 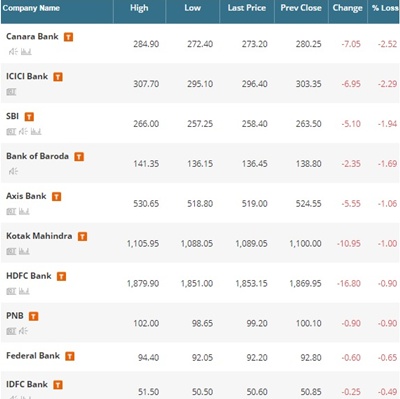 2:51 pm Market Update: The market extended losses in last hour of trade as the Sensex fell more than 150 points and the Nifty was trading below the 10,350 levels despite strong global cues.

About two shares declined for every share rising on the BSE.

Meanwhile, metals have trimmed some of their gains, but continue to trade in the green.

Atallah was formerly the CEO of Dubai Properties and was leading a portfolio of 144 projects worth USD 30 billion which included residential, commercial, retail and hospitality developments, the company said in a statement.

2:31 pm Bid for Oil field: ONGC Videsh Ltd, the overseas arm of state-owned Oil and Natural Gas Corp (ONGC), has signed a pact with Iran's IDRO Oil to jointly bid for a USD 1 billion contract for development of Susangerd oilfield in southern Iran.

The onland Susangerd field in the Khuzestan province is one of the newest finds, which Iran hopes will produce around 30,000 barrels per day of oil in two development phases.

OVL signed a Memorandum of Understanding (MoU) to collaborate with IDRO Oil, which is a subsidiary of state-run Iranian Development and Renovation Organisation, in developing Susangerd field, official sources said.

The market breadth also turned negative as about 1,371 shares declined against 1,139 advancing shares on the BSE.

"The company has issued and allotted commercial paper of Rs 100 crore," Trent said in a regulatory filing.

The proceeds will be primarily used to refinance the existing borrowings, it added.

2:05 pm Disruption in Lok Sabha: The Lok Sabha failed to transact any legislative business for the second straight day as the Congress and the TMC sought the prime minister's response on frauds in the banking sector, while parties from Andhra Pradesh persisted on their demand for a special status.

Besides the major opposition parties, NDA ally Shiv Sena protested in the Well demanding classical language status for Marathi. The AIADMK demanded the creation of Cauvery Water Management Board and the TRS raised slogans, demanding a hike in Telangana's quota in reservation.

As the Lok Sabha continued to witness uproar, Parliamentary Affairs Minister Ananth Kumar said the Government is ready for a discussion on the issue of alleged financial irregularities in the banking sector and Finance Minister Arun Jaitley will reply to the debate.

1:58 pm Joint Venture: Jubilant FoodWorks shares gained 2 percent as the company has entered into a share subscription and shareholders' agreement for a joint venture with Golden Harvest QSR Limited for operating Domino's Pizza restaurants in Bangladesh.

The agreement was signed between the parties on March 6, 2018.

The pan-European Stoxx 600 was 0.7 percent higher with every sector in positive territory. France CAC and Britain FTSE gained 0.8 percent each.

1:35 pm FinMin to coax Fitch for rating upgrade: The government will tomorrow pitch for a sovereign rating upgrade with global agency Fitch, highlighting reform push in taxation and PSU banks and its plans to gradually lower government debt.

According to sources, representatives from Fitch are scheduled to meet Chief Economic Advisor Arvind Subramanian and Economic Affairs Secretary Subhash Chandra Garg and other finance ministry officials on March 7.

It had last upgraded the rating from BB+ to BBB-with stable outlook on August 1, 2006. Later, it changed the outlook to negative in 2012 and then again to stable in the following year, though keeping the rating unchanged.

1:24 pm Sun Pharma in focus: Sun Pharma, India's largest drug maker, is well poised to resolve the US FDA's warning letter on its Halol site in Gujarat – as the three Form 483 observations the company received from the agency turned out to be minor in nature, according to analysts Moneycontrol spoke to.

The Kolkata-based bank had filed draft papers with Sebi on January 1 and obtained "observations" from the regulator on February 28, as per the latest update with the markets watchdog.

Sebi's "observations" are very important for any company to launch public issues like initial public offer (IPO) and rights issue.

According to the draft papers, Bandhan Bank's IPO comprises fresh issue of up to 9,76,63,910 equity shares and an offer for sale of up to 1,40,50,780 scrips by International Finance Corporation (IFC) and up to 75,65,804 shares by IFC FIG Investment Company. 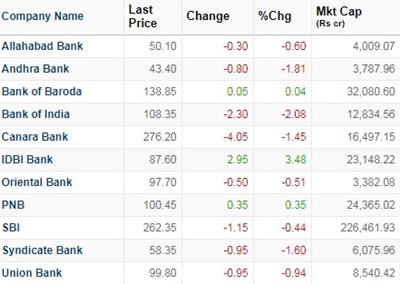 12:40 pm Record Date for Dividend: NLC India informed exchanges that the company has fixed March 27, 2018 as the record date for payment of interim dividend, if declared.

12:30 pm Arbitration Award: The Delhi High Court has upheld the arbitration award of Rs 2,950 crore as compensation along with interest to Delhi Airport Metro Express Private Limited (DAMEPL), a subsidiary of Reliance Infrastructure (RInfra), by a three-member Arbitration Tribunal, Reliance Infra said in its filing.

Reliance Infrastructure stands to get Rs 5,060 crore from the award, which it shall entirely utilise to reduce its consolidated debt. This amount is arbitration award amount plus interest till March 31, 2018.

12:20 pm Market Update: Benchmark indices continued to trade higher, but were off day's high due to volatility in banks stocks.

ICICI Bank and SBI continued to trade with half a percent loss.

12:05 pm Buzzing: Pritika Auto Industries announced the signing of agreement with Amrit Duraparts to buy assets (land, building, and machinery) of their unit No 2 in Punjab. The stock price gained 5 percent.

The newly acquired foundry has a capacity of 12,000 tons per annum.

"With this agreement, the total installed capacity of the company will increase to 50,000 tonnes per annum," forging company Pritika Auto said.

As per a BSE filing, DSP BlackRock Trustee Co, on behalf of various schemes of DSP BlackRock Mutual Fund, decreased its shareholding in the company on March 1.

Before the transaction, the schemes of DSP BlackRock Mutual Fund held 18.66 lakh shares amounting to 4.92 percent stake which has been brought down to 3.22 percent after the open market sale, it added.

11:45 am Crude Oil Update: Oil prices extended gains for the fifth straight day, underpinned by robust demand forecasts and prospects for informal contacts sought by OPEC with US shale oil producers at a key industry meeting in Houston this week.

11:33 am Buzzing: Nifty Bank index turned negative as Canara Bank, ICICI Bank, State Bank of India and Bank of Baroda were down 1-2 percent after investigation deepened in the PNB fraud case.

11:21 am Market Update: Benchmark indices lost more than half of gains in late morning deals due to correction in select banks stocks.

ICICI Bank and SBI were down half a percent each.

MoU between JSW & Aferpi guaranteed exclusive talks between the two players. The deal is pegged at Rs 600 crore.

The CBI yesterday said the violation of norms for issuance of Letters of Undertaking (LoUs) to benefit billionaire jeweller Nirav Modi and his uncle Mehul Choksi had been going on since 2010.

This is the 14th straight session of fall for the stock. It has lost as as much as 75 percent since February 14, the day the PNB fraud came to light.

10:25 am Rupee Trade: The rupee rose by 11 paise to 64.99 against the US dollar on mild selling of the greenback by exporters and a higher opening in the domestic equity market.

Meanwhile, the dollar gained against most major global currencies as concerns over a global trade war eased after investors saw Trump's proposed tariffs as more of a negotiating tactic than a hard policy proposal.

Investors sentiment was supported by the US non-manufacturing sector growth and improved risk appetite for the dollar, currency traders said.

10:15 am Market Update: Benchmark indices were off their opening highs despite strong global cues.

The Nifty Midcap was also off its opening high, rising half a percent. About 1,470 shares advanced against 579 declining shares on the BSE.

10:10 am Order Win: Share price of Jain Irrigation Systems rose 2.5 percent as the company bagged an order worth Rs 287.66 crore.

The company has bagged order for integrated irrigation solution project in Karnataka. Visvesvaraya Jala Nigam, a division of water resources department of Karnataka, has placed this order on the company through national competitive bidding, company said in release.

The company is expecting to complete the said project in 24 months.

The acquired entity has been set up to, manufacture electric motor vehicles, all types of parts, spare parts, engines, appliances and apparatus, equipment, etc.

It is part of diversification strategy of JSW Energy to foray into electric vehicles, energy storage systems and charging infrastructure which will be housed under the acquired entity-JSW Electric Vehicles.

The company's board meeting is scheduled to be held on March 9, to consider and approve raising of funds by way of issue of securities.

It will consider fundraising via equity shares and/or american depository receipts (ADR) and/ or global depository receipts (GDR) and/or any other securities convertible into equity shares and/or non-convertible debentures with or without warrants, through further public offer (FPO)/ qualified institutions placement (QIP)/ preferential issue (PI)/ right issue (RI) or through, any other permissible mode or a combination thereof.

9:42 am Market Update: The market continued to trade higher, with the Sensex rising more than 200 points and the Nifty trading above 10,400 levels on positive global cues.
All sectoral indices are in the green, with Metal index rising 2 percent.

9:29 am Asia Update: Asian stocks rallied, tracking gains seen in the US and Europe in the last session as concerns over a potential trade war faded.

Japan's Nikkei 225 jumped 2.28 percent, with the dollar extending gains against the yen as trade-related fears abated.

9:21 am PNB Fraud: Violation of norms for issuance of Letters of Undertaking (LoUs) to benefit billionaire jeweller Nirav Modi and his uncle Mehul Choksi had been going on since 2010, the CBI told a court.

The agency, which secured a 12-day remand of four accused arrested on Sunday, explained the modus operandi involved in the alleged Rs 12,636-crore Punjab National Bank (PNB) fraud before the special CBI court.

An LoU would be issued to one of the firms of Modi and Choksi, and after the money was credited to the applicants' account, a new LoU would be obtained to "adjust" the earlier one, the CBI lawyer said.

This had been going on since 2010, the lawyer said, while seeking remand of four accused including Aniyath Shiv Raman Nair, Director of Gitanjali Group of Companies of Choksi.

About four shares advanced for every share falling on the BSE. Nifty Midcap index was up 166 points or 0.86 percent.