Internet giant Google and networking giant Cisco Systems yesterday announced that they have entered into a long-term patent cross-licensing agreement covering a broad range of products and technologies. 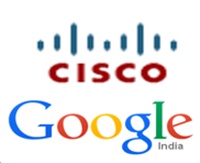 Though the two companies did not disclose details of the deal, they said that the agreement allows the two companies to extract significant value from their patent portfolios through a license to each other's portfolio and helping to reduce the risk of future litigation.

"In today's overly-litigious environment, cross-licensing is an effective way for technology companies to work together and help prevent unnecessary patent lawsuits," said Dan Lang, Cisco's vice president of intellectual property. "This agreement is an important step in promoting innovation and assuring freedom of operation."

"Our agreement with Cisco will reduce the potential for litigation, letting us focus instead on building great new products," said Allen Lo, Google's deputy general counsel for patents. "We're pleased to enter into this cross-license, and we welcome discussions with any company interested in a similar arrangement."

Both Cisco and Google are members of the Coalition for Patent Fairness, a leading advocacy group for patent reform. Cisco general counsel Mark Chandler recently reiterated a pledge not to sell patents to patent assertion entities in order to help encourage innovation rather than litigation.

Google last month reached a global patent agreement with Samsung Electronics, which is involved in a bitter long-drawn patent battle with Apple Inc.