ICANN to launch multi-lingual domain addresses for the web

Domain names on the internet have to be written in the letters of the Latin script, but that is about to change with the Internet Corporation for Assigned Names and Numbers ICANN approving plans to let web addresses be written in non-Latin characters. The move marks the "biggest technical change" as to how the internet works since its invention four decades ago. 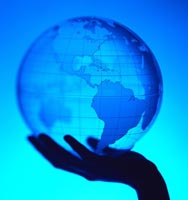 ICANN voted on Friday to include non-Latin scripts for domain names after a weeklong meeting in Seoul, capital of South Korea. The vote was announced on the last day of the non-profit group's Seoul conference.

Since they were first created in the 1980s, domain names were restricted to the 26 characters in the Latin alphabet used in English - A to Z - as well as 10 numerals and the hyphen. While the system allows limited use of other scripts, suffixes still need to use those 37 characters.

Under the present arrangement internet users with little or no knowledge of English, still have to type in Latin characters to access web pages in languages other than English.

With a little bit of tweaking, ICANN is now, ushering in the era of a truly multilingual internet. Many of the estimated 1.5 billion people online use languages such as Chinese, Thai, Arabic and Japanese, etc. With the move the internet is expected to become more accessible to people with lower incomes and levels of education.

The organisation plans to launch a fast-track process for approval of Internationalised Domain Names (IDNs) scheme on 16 November with the first IDN-compliant addresses to be operationalised by the middle of next year, according to ICANN president Rod Beckstrom.