Walmart Inc is expected to acquire a majority stake in Flipkart within a few weeks, finally beating Amazon, which was also keen on acquiring its rival. 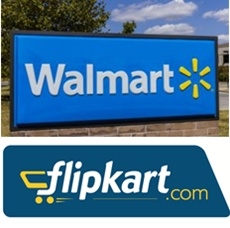 According to reports, Walmart completed its due diligence on Flipkart and has proposed acquiring 51 per cent of the stocks for between $10 billion and $12 billion.
While Japan’s SoftBank, which owns about 20 per cent share in Flipkart, is unlikely to sell its stake at present, other early investors including Tiger Global and Naspers are reported to be considering selling their stake to Walmart.
Other international investors in Flipkart, started by former Amazon employees Sachin Bansal and Binny Bansal, include eBay, Tencent Holdings and Microsoft. Flipkart has offered stiff resistance to Amazon in its bid to expand its presence in India.
The American major was also considering acquiring shares in the company, but Walmart has apparently beaten it for the time being, according to market sources.
Flipkart has over the past few years raised more than $6 billion and has emerged as the most valuable internet start-up in India. Amazon was relatively slower to respond to the Indian demand for online shopping; it has now invested about $5 billion and is planning to expand its presence significantly.
Walmart too had entered India, but restricted itself only to wholesale business. With the final acquisition of Flipkart, it is expected to significantly raise its retail presence in the country.
Of course, Amazon’s bid to acquire Flipkart could face problems with the Competition Commission and even the government, as it would then have an overwhelming control over the online business.
Walmart has been eyeing Flipkart for the past two years, and has been in talks with its promoters. However, it was not until Amazon began showing interest in Flipkart that Walmart pushed ahead aggressively.
Executives from both companies have been meeting often over the past few weeks.
If the Walmart-Flipkart deal is finalised, the online retail trade will continue witnessing a bloodbath, with both Flipkart and Amazon engaged in a gruesome battle.
The biggest beneficiaries of course would be the millions of Indian consumers who have been buying a range of products and services from these two online firms.
MORE REPORTS