BigBasket, operated by Supermarket Grocery Supplies Pvt Ltd, on Friday said it has raised $300 million in a Series E funding round led by Alibaba Group Holding Ltd, in announcing a widely anticipated deal that would help the online grocery firm to keep its lead in the market. 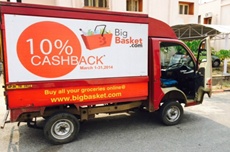 The investment, which had been in the works for several months, is the largest raised by the company and comes at a time when the competition is set to heat up with the entry of Amazon and Flipkart into the grocery segment.

According to the documents from the Registrar of Companies, about $196 million was invested by these four investors combined together. Alibaba alone contributed about $140 million to this round.

BigBasket is expecting over 50 per cent growth in its annual turnover for the financial year ending 31 March to Rs 2,200 crore, Hari Menon, founder and chief executive officer of BigBasket, said in an interaction with Moneycontrol.

The firm did not comment on whether a part of the investment was a secondary share sale by some existing investors.

"We had earlier raised a D3, which is also part of the filing and this is actually a combination of primary and secondary. We are not disclosing the breakup," Menon said, adding that some early investors have been given partial exits in the company without disclosing their names.

Proceeds from the round will go towards supply chain expansion by creating new sourcing channels with farmers, technology upgradation and efforts to grow the customer base.

''The funds will be directed towards bettering our technological, analytical, and infrastructural prowess, all of which will enable the company to move up the curve. BigBasket is currently partnering with about 1,800 farmers throughout the country and aims to become the 'most preferred partner' for up to 3,000 of them,'' said Menon.

BigBasket started operations from Bengaluru in late 2011 and has expanded into 30 Indian cities. It sells everything from vegetables and packaged food to dairy products and kitchen utilities.

BigBasket plans to go deep in the cities in which it already has a foothold, the company said. It will also strengthen its business-to-business delivery vertical, where it offers itself as a technology-enabled grocery supplier to hotels, restaurants and caterers.

As of March 2017, BigBasket led the on-demand grocery segment with a 35.2 per cent market share, closely followed by Grofers and Amazon Now at 31.5 per cent and 31.2 per cent respectively, according to Kalagato, a market intelligence provider, as cited by Mint.

Alibaba's investment is likely to make way for a strategic partnership between BigBasket and Paytm Mall, an Alibaba investee company, which at one point was considering a direct investment in BigBasket.

''BigBasket is delighted to receive this funding from Alibaba, which will essentially be directed towards growth and consolidation. The multinational e-commerce retailer fits in best with what we believe in,'' said Menon.

Bigbasket has so far raised $556 million and has a valuation of about $900 million post this round of funding.

"The E-grocery market from here on is only going to grow. We are going to see a lot more new players coming in with a pretty good amount of aggression for example companies like Amazon, Flipkart. Besides, there will also be offline players who will actually now start having online presence also," said Menon adding that there was a scope for multiple players in the market.

India's retail market is worth over $900 billion of which grocery shopping accounts for about $600 billion of that, he said.

The company, which has Bollywood actor Shahrukh Khan as its brand ambassador for the last two years, will also continue its association with him for the third consecutive year.

Bigbasket is also in talks with Paytm another investee company of Alibaba for business support agreement for a larger synergy.

"We are in the process of finalising a business support agreement with them because we see a lot of synergy in working together and both of us are large investee companies of Alibaba. For example, on the payment side, Paytm will become the default payment gateway on BigBasket. On the mall side, we will power groceries for them ... kind of merchants or enablers but will a much stronger integration," he said.

"We will have other payment gateways on BigBasket but ideally we don't want to have too many ... if you have a partner organisation that actually runs a payment gateway we will probably become the default one," he added.