The world's first ATM capable of exchanging bitcoins for any official currency has opened in Vancouver, Canada. 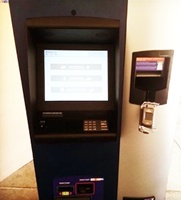 Though the machine delivered to Vancouver by US manufacturer Robocoin resembles an ordinary cash ATM, it however swaps Canadian dollars for bitcoins, the virtual currency of the internet invented in 2008 by an anonymous computer scientist known only by the pseudonym Satoshi Nakamoto.

According to co-owner, Micthel Demeter, a local entrepreneur who started trading in bitcoins several years ago, the ATM was the world's first ATM of the kind. Demeter, earlier this year, along with two partners set up Bitcoiniacs, a Vancouver storefront money exchange.

Customers need to first register their hand print before using what has been claimed to be the world's first bitcoin ATM.

Demeter and his friends, who were high school students together, said they saw a business opportunity in ATMs.

For accessing their online account of bitcoins from the ATM, customers use a private key - like a bank PIN number and withdraw cash equivalents from their bitcoins or deposit cash bills. The current conversion rate stands at one bitcoin for $214.

The transfer of the money on the internet happens via the Canadian VirtEx exchange.

As the number of businesses and customers using bitcoins increased, the bitcoin value soared from $13 in January to a high of $266 in April. The internet currency is also being used to hedge against currency fluctuations and speculate by some investors.

The bitcoin ATM resembles any other conventional ATM but it had barcode scanners, unlike other ATMs.

Reuters quoted Jordan Kelly chief executive of Robocoin, as saying it was as easy as walking up to a machine, scanning one's hand, entering some cash and buying bitcoin. He said, with this it was a two-minute process, as against any online exchange, where it took two days.

Bitcoins, currently worth around $210 each, can be transferred without having to go to banks or clearing houses, which cut fees. Users could buy products and services online or in a handful of stores.

At the bitcoin ATM users scan their hand to confirm identity. Funds them move to or from a virtual wallet on their smartphone. In an effort to curb money laundering and fraud, the system limits transfers to $1,000 a day.

Bitcoiniacs, the operator of the ATM, would roll out four other kiosks across Canada in December. According to Robocoin, Canada was the ideal place to launch the kiosk due to a critical mass of users and less stringent oversight than in the US, where the trade was being monitored by anti-money laundering regulators.