A Delhi special court granted anticipatory bail to Karti Chidambaram till 16 April, the next date of hearing, in the Aircel-Maxis case. 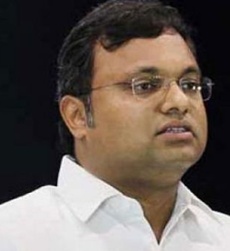 Senior advocates Gopal Subramaniam and Kapil Sibal represented Karti.
While granting anticipatory bail, special judge OP Saini stipulated that Karti would not leave the country without the court's permission, and that he would appear before the investigating officer whenever summoned.
The court gave three weeks to the CBI and the Enforcement Directorate (ED) to file their replies on Karti's anticipatory bail pleas.
This is the second major relief for Karti, son of former finance and home minister P Chidambaram, in as many days. On Friday, the Delhi High Court had granted Karti bail in the INX media case (See: Delhi High Court grants bail to Karti Chidambaram).
Following this, he had filed a plea seeking protection from arrest in the Aircel-Maxis case, initiated by the CBI and the Enforcement Directorate (ED) in 2011 and 2012 respectively.
The ED had alleged that Karti was paid Rs26 lakh on 11 April 2006, for FIPB approval to Global Communication Holding Services Ltd for making its investment in Aircel, in the Aircel - Maxis case.
Kapil Sibal, arguing in the CBI case on Saturday, said there was neither any allegation against Karti in the Aircel-Maxis case nor was there anything to show that he knew the Foreign Investment Promotion Board (FIPB) officials.
In the ED case, Gopal Subramaniam, also appearing for Karti, argued that his client had cooperated in the other matters and that he would neither flee from the county nor tamper with evidence.
MORE REPORTS