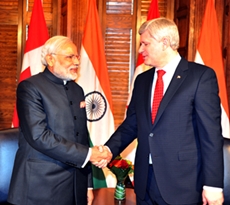 The agreement to resume commercial cooperation in the civil nuclear energy sector was announced on the second day of Prime Minister Narendra Modi's official visit to Canada.

The resumption of ties in civil nuclear energy sector comes after decades, Prime Minister Modi said while hoping his visit would act as a "springboard" for taking the bilateral relationship to a new level.

Canada, the first to open uranium supplies to India, banned exports of uranium and nuclear hardware to India in the 1970s after New Delhi used Canadian technology to develop a nuclear bomb.

The two countries had since struck a deal in 2013 to revive civil nuclear ties with the symbolic Canada-India Nuclear Cooperation Agreement.

"During this visit, our two countries will resume commercial cooperation in civil nuclear energy after decades. This will be a defining symbol of our mutual trust and understanding, and of our willingness to look beyond the boundaries of the past to the opportunities of the future," Modi wrote in an opinion piece in the Canadian paper The Globe and Mail.

Modi, the first Indian Prime Minister to visit Canada in 42 years, said both countries will benefit immensely by an early conclusion of a Bilateral Investment Protection and Promotion Agreement and Comprehensive Economic Partnership Agreement.

"I have come to build a strategic partnership with Canada in pursuit of India's economic transformation and a more peaceful, secure and stable future for our two countries," he wrote.

"Our relationship has been adrift in the past. The potential of our partnership remained a promise on a distant shore. However, in recent years, India and Canada have begun rediscovering each other," Modi said.

He lauded Canadian Prime Minister Stephen Harper's efforts in promoting bilateral ties, saying he has led with great vision to chart a new, more purposeful course in the relationship.

"As in Canada, the relationship enjoys broad political support in India," Modi said adding that a "close strategic partnership" between the two countries is natural.

"The second-most-populous country in the world has shifted economic gear," he said.