New Delhi: Russia, a leader in Fast Neutron Reactors (FNRs), has offered to partner India in its three-stage nuclear power programme that eventually aims to harness the thorium fuel cycle for the generation of nuclear power. As a first step in this direction both countries have decided to look at jointly developing a ''new generation'' of fast neutron reactors. 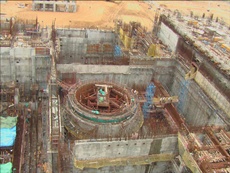 Fast reactors, commonly known as 'breeders' because they breed more fissile material than they consume, make up the second stage of the country's three-stage nuclear programme. Such reactors use 'fast' or high energy neutrons to sustain the fission process, in contrast to water-cooled reactors that use 'thermal' or low energy neutrons.

According to the Department of Atomic Energy (DAE) officials, the two countries will now work on plans to develop a ''new generation'' fast neutron reactor. A proposal in this regard was forwarded by the Russian side in the course of the official visit of their president, Dmitry Medvedev, to India earlier last month.

In the first stage, 20 Pressurised Heavy Water Reactors (PHWRs), fuelled by natural uranium, are already in operation. The second stage envisages building a series of breeder reactors that will use plutonium reprocessed from the PHWRs' spent fuel and depleted uranium. In the third stage, reactors will use thorium and uranium-233 to generate electricity.

India is a recognised leader in the field of 'breeder' technology and the only country in the world that has developed a power generation programme that consciously seeks to tap 'breeder' technology. With other nations such technology is only an option that they drift towards, or away from, depending on circumstances.