India looks to swap Russian gas for Myanmar's with China

India is closely looking at the possibility of swapping natural gas supplies from Russia with Myanmar's gas supplies to China as an alternative to building a gas pipeline from Russia's Siberian gas fields across China to India, which is expected to cost a whopping $25 billion. 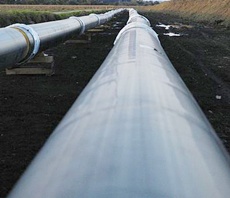 ONGC Videsh, the overseas arm of state-run explorer Oil and Natural Gas Corporation (ONGC), has been in talks with Russian gas giant Gazprom for construction of a pipeline to India, possibly through China.

India, the world's third biggest energy consuming nation, had in October also signed an initial pact with Russia for building a 4,500-km to 6,000-km long pipeline from Siberia to India.

Engineers India Ltd and Gazprom PJSC were also jointly preparing a blueprint for laying a gas pipeline. However, the high cost of laying a pipeline from Russia's Far East to northern India is a big deterrent.

The two sides are now looking at an alternative plan, under which Russia will provide gas to China and in return, the existing pipeline between Myanmar and China will reverse its flow. ''If both China and Myanmar agree to this, we will have a connector between India and Myanmar,'' said N K Verma, managing director of ONGC Videsh Ltd.

India and Russia had recently agreed to construct a $25-billion natural gas pipeline from Siberia to India.  ''Among the options like Himalayas, TAPI route and Iran route that we considered, the Chinese route appears to be the most favourable if all the countries agree to it,'' Verma added.

"Myanmar sells gas to China through an existing pipeline. If Russia can provide equivalent gas to China, then we can reverse the flow of gas from Myanmar to China and bring that gas to India," he said on the sidelines of the Petrotech conference here.

In effect, Russia will supply gas to China, which in return will give its share of gas from Myanmar to India. A smaller pipeline from Myanmar will need to be built into eastern India for importing that gas, he said. The swap is more economical but would require China and Myanmar consenting to the deal.

The Russia-to-India pipeline that was being considered will see its route passing through Himalayas into Northern India, a route which poses several technical challenges.

Alternately, the pipeline can come via Central Asian nations, Iran and Pakistan into Western India. But the route will be expensive compared to the long discussed but shorter and cheaper Iran-Pakistan-India pipeline.

It would be cheaper to buy gas from Tehran through IPI rather than building such an expensive pipeline, sources said.

The third and the longest alternative is to lay a pipeline through China and Myanmar into North East India bypassing Bangladesh.

According to preliminary cost estimate prepared by state-owned Engineers India Ltd, which October signed an agreement with Gazprom for studying the Russia-India pipeline, the longest route of 6,000 km may cost close to $25 billion.

The cost of transporting gas may be $12 per million British thermal unit, according to EIL.

The MoU signed in the presence of Prime Minister Narendra Modi and Russian President Vladimir Putin at the India-Russia Annual Summit on sidelines of the 8th BRICS Summit in Panaji, Goa.

While the cost of transporting gas via the long discussed IPI pipeline is less than $1 per mmBtu, it would cost $2 on the Turkeministan-Afghanistan-Pakistan-India (TAPI) pipeline. Against this, the transportation cost of gas on the Russia-India pipeline would be around $4 per mmBtu.