Tens of thousands of people in the Canadian oil sands city of Fort McMurray, Alberta, were ordered to evacuate as wildfires engulfed homes and sent plumes of smoke into the air, making it the largest evacuation in the city's history. 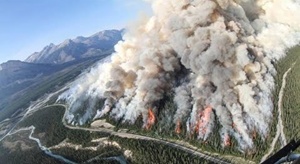 There were no deaths or serious injuries reported but more than 80,000 residents were ordered to leave on Tuesday today after an earlier order that had applied to almost 30,000 people - mostly on the city's south side - was extended to thousands more as flames continued to make their way into the city, according to CTV Television.

Officials said residents had little notice to flee as the wildfires were made worst by harsh winds on a day of already high temperatures in a short amount of time.

Fire chief Darby Allen of the Regional Municipality of Wood Buffalo said homes were still on fire as he spoke with reporters during a news conference Tuesday evening.

Like everyone else, Cassie White, a 19-year-old resident of the Canadian oil-sands town, was trying to escape the flames that began to tear through neighborhoods Tuesday. But in a car bound for Edmonton with her boyfriend, White discovered that there was no easy way out.

In an interview with the Globe and Mail, White described a scene that resembled a ''zombie apocalypse.''

As she drove south, ''flames jumped over the highway'' and engulfed a gas station to her left. ''It was torched,'' White said. Everywhere she turned, there was fire:

''People were driving on the shoulder. There were flames maybe 15 feet high right off the highway. There was a dump truck on fire - I had to swerve around it - and there was a pickup truck on fire as well. The entire trailer park on my right was in flames. Roofs were coming down.''

Abnormally warm weather and dry conditions combined to make Alberta's boreal forest a ''tinder box'', the Associated Press reported. While the wildfire appeared manageable over the weekend, it grew into an inferno on Tuesday, buoyed by strong winds and dissolving into showers of ash.

The flames tore through the city, hitting several neighbourhoods and a trailer park before striking the downtown core. Before nightfall, a mandatory evacuation order was issued. Fort McMurray's 80,000 residents needed to go - but where?

Those with cars were directed to Highway 63, where vehicles were at a near-standstill. Residents watched as flames jumped the road.

As the frantic residents fled, it was uncertain whether they would have places to go. According to the CBC, food and lodging were offered at nearby oil-sands work camps, but even those - which generally accommodate thousands of employees - became overwhelmed.

Three miles south of Fort McMurray, a former resident of the town offered evacuees free lodging at his resort.

''This is just devastating, but it's amazing how the people have pulled together,'' the establishment's owner, Curtis Galas, told CBC.

On Twitter, under the hashtags #ymm and #ymmfire - YMM is the airport code for Fort McMurray International Airport - other establishments announced that they would be opening their doors to those seeking shelter.

While no serious injuries have been reported, residents despaired of the damage to their homes, many of which have been lost to the flames. No estimates have been released of the number affected.