Subsidised gas quota may go up, but at a price: Moily 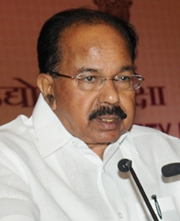 Petroleum minister M Veerappa Moily said on Sunday said that the government is considering increasing the quota of subsidised LPG cylinders to 12 per household – but also suggested that the price per cylinder would go up.

Reports today said prices of subsidised cooking gas could go up by Rs75-100 a cylinder, with corresponding increases in the prices of piped natural gas and diesel in a steep one-time hike.

Moily backtracked on his statement last week that there was no move to increase the quota of subsidised gas cylinders per household to 12 from the current nine. He said the final decision on the issue will be taken by the Cabinet Committee on Political Affairs – which if deconstructed means that any decision on a price hike would be more political than economic.

But increasing the limit to 12 would result in an additional fuel subsidy burden of Rs3,300-5,800 crore for the government.

"If that proposal (for raising LPG cap) comes, we need to examine pros and cons. Ultimately, the decision will be taken by Cabinet Committee on Economic Affairs (CCEA) or CCPA," he said. "We are going to take a considered view ... we are considering the suggestions."

Petroleum secretary Vivek Rae, talking to reporters with Moily alongside, said the ministry was moving the cabinet to ensure that a minimum $65 per barrel is paid to oil and gas producers like Oil & Natural Gas Commission (ONGC) from current $40-45 so that ''difficult oil'' could be explored and produced.

Raising the price for producers means the subsidy the government bears on fuel supplies would also rise. "The question is who will bear the (increased) burden. The gap will have to be borne by consumers. Options are being discussed," Rae said.

Asked if this would mean a one-time hike of Rs 2-3 on diesel over and above the current 50 paisa per month along with an increase in LPG rates, he said, "We have to see that. I can't say today what the government will decide."

Diesel, LPG and kerosene rates at present are capped way below cost of production and the gap is made good by the government by way of cash subsidies and dole from state-owned oil producers like ONGC and Oil India Ltd (OIL).